Mom Scares Son Dressed as Ghost, Terrified Son Runs Out of Room, Comes Back, and Smacks ‘Ghost’ in Head 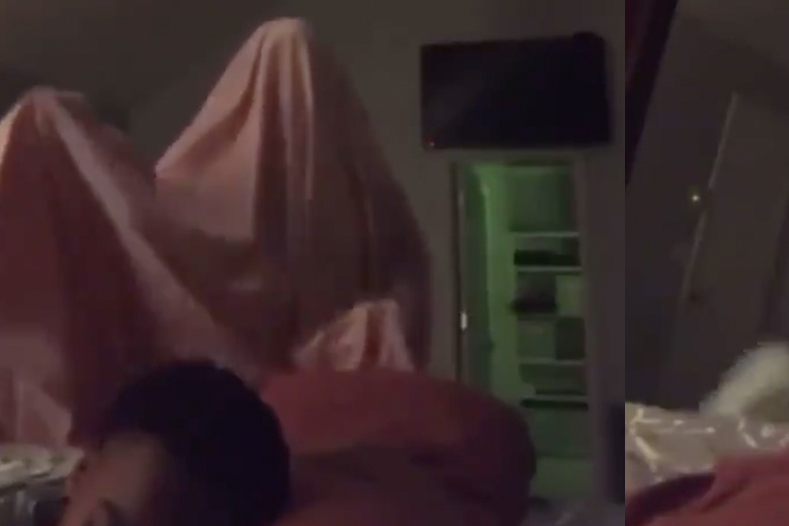 A mom thought she’d have some fun with her young son so she decided to toss a blanket over her head, dress like a ghost, and wake the kid up. Apparently, the woman told her son that if he fell asleep in her bed again — which he did almost every day — she was going to prank him. Naturally, she also filmed it and posted it to social media.

And why not? He’s a little boy. It’s fair to assume he probably gives his mom some trouble from time to time, so why not hilariously return the favor, right?

So mom walked up to her sleeping son with the blanket tossed over her head, shook him once, and then shook him again. Her groggy child rolled over and looked up, wondering who was waking him in the middle of the night. What met his eyes was, to him, a sight of pure terror.

The kid’s ancient, evolutionary instincts of fight or flight took over and, after an initial shriek of horror, he sprang out of bed and sprinted for his bedroom door. The door wouldn’t open, though. He was trapped in the room with this demon. So he made for his closet, presumably to hide and change into poop-free pants.

The mom took the blanket partly off of her head so she could laugh for the camera. The prank was a success. Her child was hilariously traumatized. Victory!

For the Kid Everything was Moving in Slow Motion

This mom freaked after seeing a ‘ghost baby’ sleeping with her son — but it wasn’t a ghost at all pic.twitter.com/BBbbWSgdBw

Fear quickly proved it trumps laughter. The mom’s celebration was short-lived, however. In the midst of a triumphant chuckle, a laundry basket slammed into her head and she collapsed on the floor. Then, her son, standing over what he still thought was a spirit from hell sent to devour his soul, reared back and smashed the laundry basket into her again. Finally, thanks to the now-frightened mother’s screams, he realized that this wasn’t a demon but just his mom messing with him.

In the end they both came out of the night with not quite the results they were expecting, but my God are we the viewers all the richer for it. This is why, other than the Chinese stealing Americans’ data, is TikTok was invented.

This article was originally published April 7, 2020.