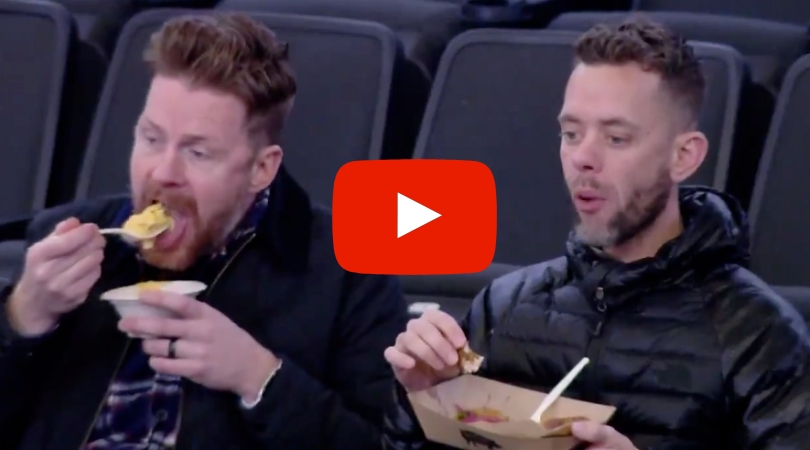 Have you ever gone to a basketball game, bought yourself a hotdog and beer, just waiting for the perfect moment to take that bite? Then all of a sudden, you go in and bite that delicious hotdog, only to look up and see that you’re on the giant screen hovering over the court? So you just look up with your mouth full, wave, and try to smile all while swallowing as fast as you can?

Well, what if I told you that now there is something called the “reverse eating camera.” Yes, its exactly what it sounds like. Turns out the Milwaukee Bucks (a basketball team for all you non-sports fans out there) have begun to experiment with a camera that is entertaining, but a little bit gross at the same time. I guess you can say the NBA team is really out here trying to come up with ways to entertain their fans.

This is a WEIRD cam, Milwaukee. pic.twitter.com/ziXPEabWWs

Basically, they record fans about to dive into their favorite stadium snacks, and then they film them taking a huge bite only to later reverse the action. They then air the footage right on the giant screens showing fans eating, making it look like they are magically pulling their food right out of their mouth. Safe to say no delicious detail goes unnoticed because well, the cameras are everywhere.

Several people across social media, especially sports fans, were pretty taken aback with the video, because like I said, it’s gross. The Bucks have reportedly been doing this since last season, but the videos only just came to light earlier this week after podcast co-host J.E. Skeets, shared a hilarious yet weird 30-second compilation.

As expected, the post quickly went viral gathering several retweets and more than 700,000 views. A lot of users reacting like you’d expect, while others stated they were terrified of going to games now because they didn’t want people to record them eating. Personally speaking, I have to say its kind of entertaining in a way. Despite it being hella weird, it’s funny. They have found a way to entertain the crowd, so they are probably going to stick with it. Kiss Cam’s are so overrated, anyway.

My advice to you if you ever go to a game…maybe just stick with a coke or a beer. Which sucks, because if you’re anything like me, you go to a game for the sole purpose of getting yourself a good slushie and some nachos stacked with jalapenos. But no, gone are the days of enjoying some good junk food.

Well, unless you want people to see you basically spit out your food. Then, by all means, get yourself some nachos. Think of it as a new fan experience.

Watch: What is Michael Jordan’s Net Worth?