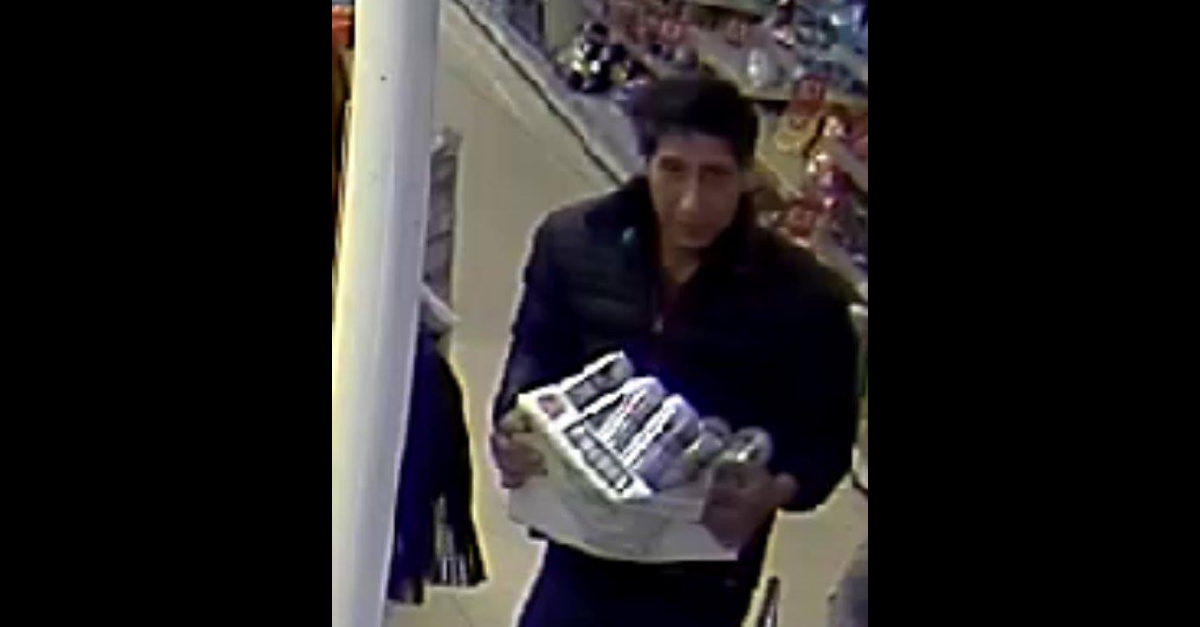 A man in Blackpool, England was caught on camera stealing a case of beer from a “restaurant” (it looks like a convenience store or gas station… maybe this is a weird British/American language thing) and Blackpool Police have released a photo of the suspect, hoping for leads.

Turns out, the suspect looks a lot like actor David Schwimmer, a.k.a. Ross from the show Friends. A whole lot. The Blackpool Police have not, inexplicably, dub the robbery “The One Where Ross Stole Beer.” A real missed opportunity there.

The man looks so much like Schwimmer that he’s even wearing the actor’s signature mopey facial expression as he walks out of the store, though being an adult and having to steal beer (not even craft beer) can’t be a super great feeling so the mood is understandable.

In case anyone had any (reasonable) questions about his whereabouts the night of the robbery, Schwimmer made sure to let everyone know on social media that he was in New York during the incident. Also stealing beer, but doing it in New York.

Officers, I swear it wasn't me.
As you can see, I was in New York.
To the hardworking Blackpool Police, good luck with the investigation.#itwasntme pic.twitter.com/EDFF9dZoYR

Schwimmer is a lowkey hilarious person, by the way. Not just a dime a dozen sitcom star. I love this video, but aside from his work on Friends he’s also done some admirable work as a comedy director. Not to mention his cameo on 30 Rock was one of the best in the series’ long and ridiculously amazing list of cameos.

Blackpool Police still haven’t caught the suspect, but they too were able to rule out Schwimmer as a suspect.

Hopefully this robber learns a valuable lesson from all this. That being that he looks like David Schwimmer and shouldn’t have to steal beer, because he can just pretend to be Schwimmer and have drinks bought for him wherever he goes.

Editor’s note: This article was originally published on October 24, 2018.

Watch: The “Friends” Intro with Sound Effects Instead of Music is Downright Spooky