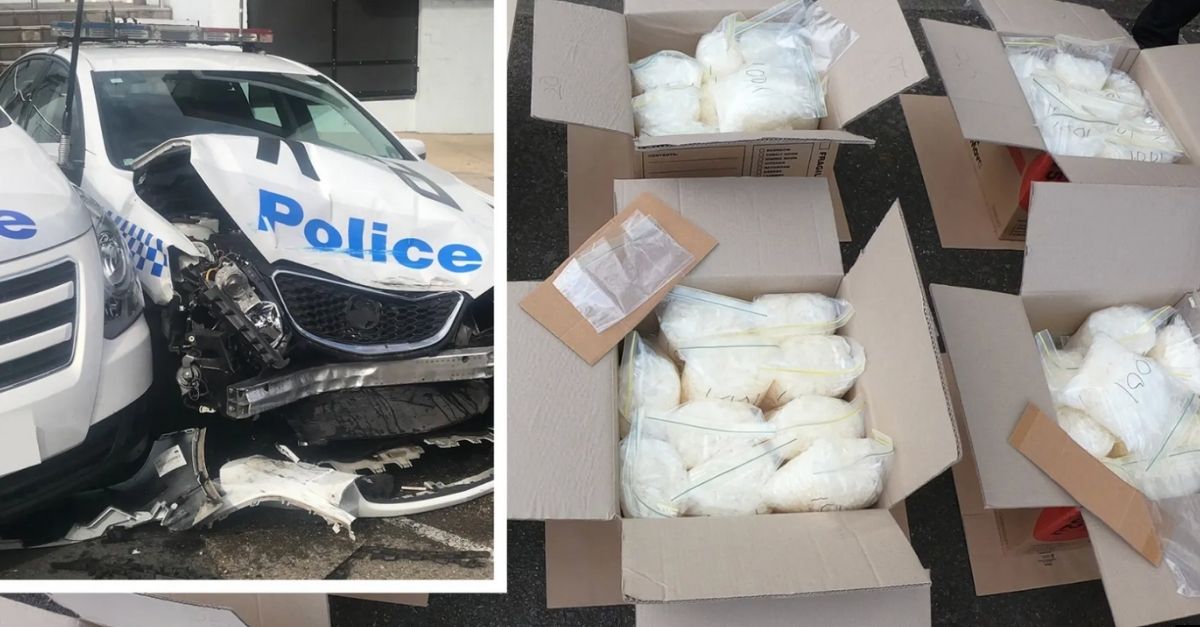 Talk about having a bad day. An Australian man definitely did not see this coming when he was caught with 600 lb of methamphetamine after he literally ran his transport van into two cop cars. His little stunt has now earned him more than six years in prison. Simon Tu was driving a Toyota HiAce with drugs worth more than $145 million when he plowed into the two control cars that were parked outside the Eastwood Town Police Station after drifting to the wrong side of the road. Basically, this man made it easier for him to get arrested.

Obviously afraid of the outcome, he decided to make a run for it in high gear, but police were able to catch him about an hour later. When they caught up to him officers noticed he was nervous and was visibly shaking and fidgeting as he told officers he had experienced a microsleep. Which let’s be real, this man was clearly probably high on meth and knew they would bust him because of the number of drugs in his back seat.

Also, how do you not notice two cop cars? When cops searched Tu’s van, they found multiple cardboard boxes filled with crystal meth. He was transporting 260.47 kilograms of the substance with purity ranging from 71.5 to 80.5 per cent. According to Detective Glyn Baker of the Ryde Police, “This would be one of the easiest drugs busts that NSW Police has ever made — incredible, absolutely incredible.”

Earlier this year the Australian man was guilty of supplying a large commercial quantity of a prohibited drug. District Court Judge Penelope Hock in New South Wales decided to slam the dumb drug lord over here with a jail sentence this Friday, according to the Sydney Morning Herald. Tu will be eligible for parole in July 2023. Hock gave him 6 ½ years on a parole period of four. He was also convicted on two lesser charges of failing to give particulars to police and negligent driving.

During a hearing this week, Tu’s lawyer, Phillip Boulten, described his client’s action as “negligent and shambolic.” She stated, “His driving is what gave it all away, and his role was to drive, so that in some sense it was a hopeless execution of the task he was asked to perform.” Despite him being arrested, Tu refused to confess to Australian police where the drugs came from or who told him to pick them up. The court also heard that he has a heavy history of gambling, uses cocaine, and owed money commercially and personally.