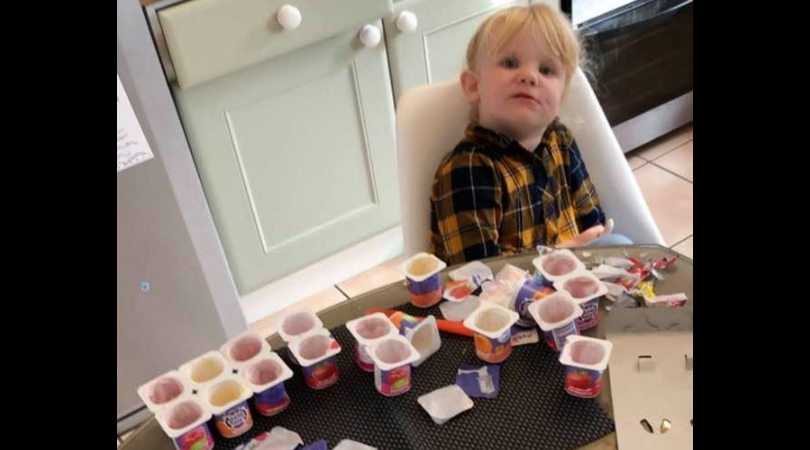 Toddlers truly amaze me so much. It’s funny how much they can get up to in a short amount of time because they are so sneaky that you never see it coming. Like Olivia Whysall, who managed to devour 18 cups of yogurt in a span of 10 minutes. Someone called the Guinness World of Records because I’m sure this 3-year-old just broke a record.

According to her father, Arron Whysall, he had briefly left the room for 10 minutes and was shocked to discover that Olivia had gotten her hands on 18 cups of Yoplait’s Petits Filous yogurt, and had managed to down them all at once. Whysall stated, “When I found Olivia with all 18 yogurts, I asked her, ‘Have you eaten all of those?’ and she quite proudly said, ‘Yes.’ “I just thought, ‘Fair enough.’”

So, being a dad, he quickly snapped a photo of the hilarious scene and shared it to Facebook with the caption, “have kids they said.”

Of course, the father wasn’t angry at his daughter, because well it’s funny. How does a toddler manage to get 18 yogurts down their stomachs in a span of 10 minutes? That is insane! I do have to say, she is looking quite proud in that photo, she knew exactly what she was doing. Sneaky Mcsneakster pulled a fast one.

The father said he had been fixing a fence in the family’s back garden in Nottingham when his 6-year-old son Oscar gave him the heads-up about Olivia’s unusual snacking. His partner, Billie Hardie, is a home childcare provider and buys yogurt in bulk to feed both Oscar, Olivia, and the kids she works with. Safe to say there is yogurt everywhere in their house.

Luckily, little Olivia seemed to recover just fine from the “accidental incident,” and didn’t have any belly aches. Which is surprising since you think all the yogurt would expand her stomach and make it hurt, but hey I guess we all have different appetites? Now if only she ate her veggies like that.