Son of Murdered Woman Attacks His Mom’s Murderer in Court 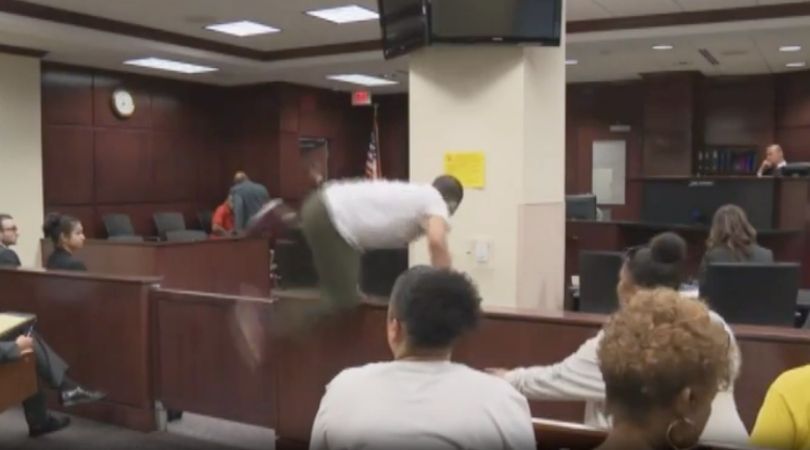 A Michigan man accused of fatally shooting his wife was three seconds away from getting what he deserved, after almost being attacked by her son during a court appearance. 46-year-old Vashon Flowers is charged with open murder, meaning prosecutors could charge him with either first-degree murder, second-degree murder or manslaughter, in the death of Jamie Thomas-Flowers at their Muskegon Heights home last month.

According to prosecutors, Flowers kicked the door to their home and broke in on the morning of May 19, shooting Thomas-Flowers four times at a close range. Flowers voluntarily turned himself into police later that night. According to authorities, he has previous felony convictions including one of assault with a dangerous weapon.

As courtroom video shows, obtained by MLive.com, London Thomas, Thomas-Flowers’ son, appears to physically leap from this seat and run across the room, jumping the courtroom barrier to attack the accused man who was sitting in the jury box speaking with his public defender. Not having it, guards were quick to grab Thomas and was arrested by court officers. He appeared in court the following day where he was held in contempt and barred from future proceeding in the case.

Honestly, between you and me, I don’t really understand why this man was arrested, let alone banned from going to future court hearings. He was just defending his mother. Heck, if I wasn’t a wreck during the trial, I would totally do the same. This man basically confessed to killing his wife, so yeah, of course, her son is going to be furious. Now, I know that there still needs to be a full court trial for Flowers, and you ‘remain innocent’ until you’re actually proven guilty, but come on. We all know the answer to what will happen, this man walked himself to the police department.

I would have done the same shit. I'm just sad that he is banned from future court proceedings.

Son of slain woman jumps over a barrier and sprints across a courtroom https://t.co/FDGjWCgUu1 via https://t.co/cPnPeF3N5n

The guards could have at least waiting a little bit to tackle the man to the ground and give him a five-second start. At least let the man throw in a good punch or a slap before stopping him. Sometimes all you need is a good fashioned method of justice to release some tension and anger. Just saying.

Also, can we talk about that jump?! Those are some serious ninja moves, I?m highly impressed.