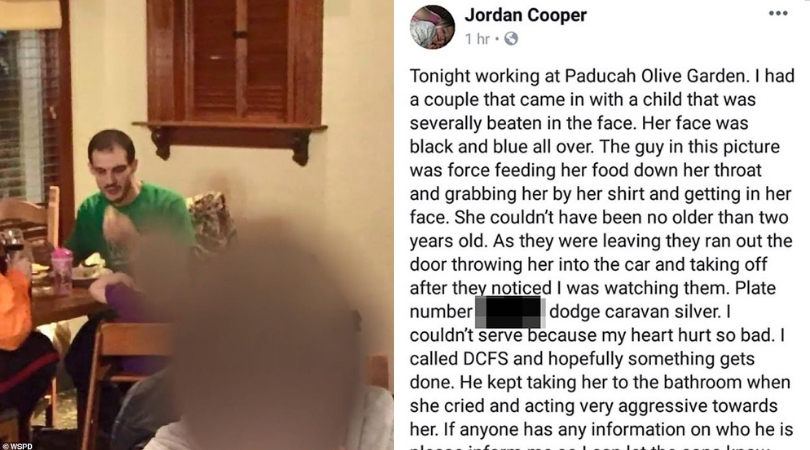 Jordan Cooper is a waitress at Olive Garden in Paducah, Kentucky, but usually never works on Sunday nights. This time, she decided to take an extra shift which left her shocked. During Cooper’s shift, she and her coworkers noticed a family they had just seated were acting strangely. Cooper said when she went up to the family, two parents and two children, she saw a distressed look on the baby’s face as if it was asking her for help.

Cooper said the one-year-old had visible black and blue bruises on her face. The parents were also aggressively force-feeding the toddler and took her to the restroom multiple times when she wouldn’t sit still. An expecting mother saw the girl and decided to take a picture of the family. Cooper gave the mother her phone number so she could later send the images to the cops.

The couple reportedly got suspicious and tried to pay their check quickly to leave the restaurant. Cooper decided to follow them outside and took a photo of their license plate, calling 911. She also shared the photo of the little girl and the partial plate number, asking her friend on Facebook to help track the parents down. Her post was shared more than 15,000 times, but she quickly took it down after police arrested the couple.

One of her friends, Aaron Caldwell, a metropolis 911 dispatcher, saw the post and began to investigate and contacted the Paris Police Department once he had enough information. Later that night, the two suspects were arrested at their home after a welfare check. The conditions of the home were reportedly so horrific, that a police officer had to step out and collect himself.

Both children inside their home were removed and taken to Child Protective Services. The baby was also sent to the emergency room for treatment. Authorities arreested Jessica Woodworth and Mark Lee Pierce on charges of aggravated child abuse and neglect with a set bond of $200,000 each. It just goes to show you that sometimes social media can be very powerful.