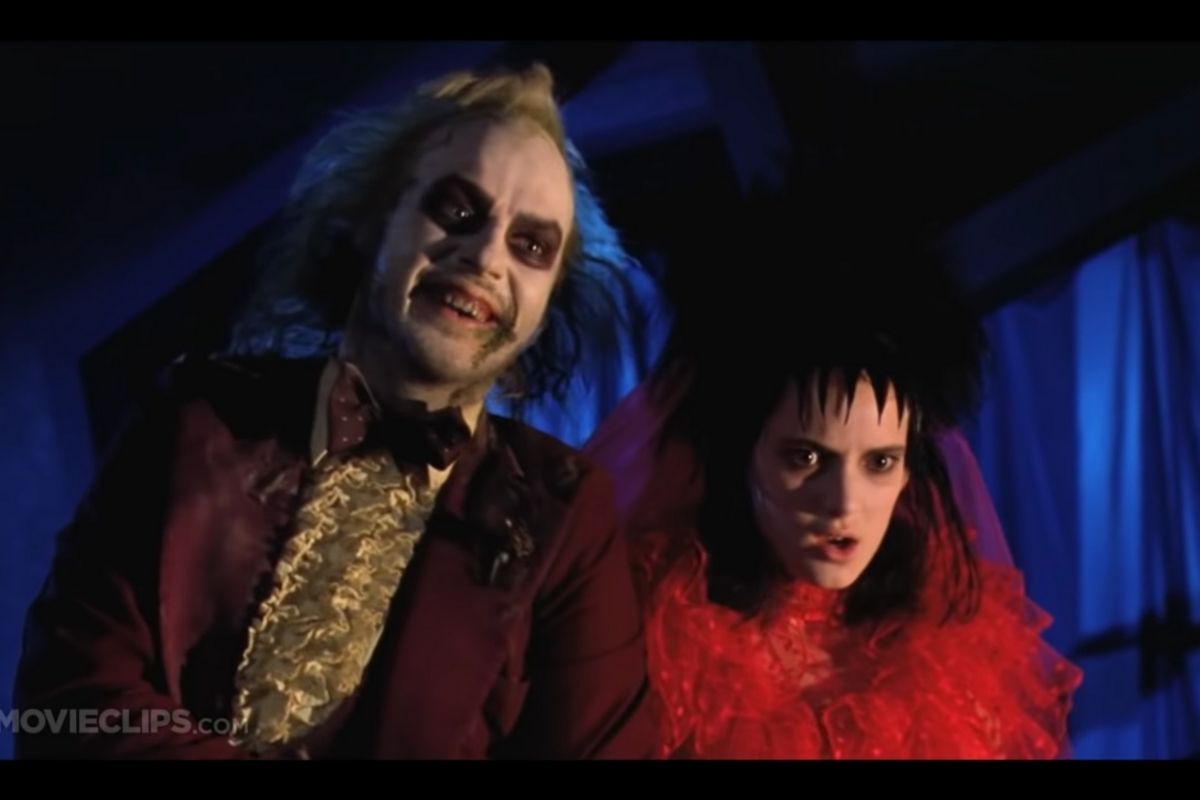 Michael Keaton recently made news with the announcement that he will be reprising his role as Batman in the upcoming D.C. film, The Flash. But that’s not the only cartoonish 80’s role that Keaton is remembered for. Also directed by Tim Burton was the 1988 creepy classic Beetlejuice, which brought to life (literally) the demonic, pin-striped poltergeist. So it might surprise you to learn that Keaton, who portrayed the title character, had only 17 minutes of screen time.

The Story of ‘Beetlejuice’

We all know that filmmaker Tim Burton has an affinity for Halloween. His recognizable style has delivered such gothic, fantastical treasures as Edward Scissorhands and stop-motion masterpieces like The Nightmare Before Christmas and Corpse Bride. But his breakout cult classic was Beetlejuice, the supernatural comedy with a star-studded cast and peculiar premise. When Barbara and Adam Maitland, played by Alec Baldwin and Geena Davis, are killed prematurely, they’re forced to accept their fate as house ghosts haunting their New England vacation home. But when insufferable yuppies (Catherine O’Hara and Jeffrey Jones) move in, these stubborn spirits will combat them with any means necessary.

However, spooking the Deetzes proves to be a nearly impossible task. Rather than getting “scared sheetless” by the Maitlands’ predictable ghost-like behavior, Charles and Delia Deetz continue to garishly remodel the quaint home. The Maitlands are so hopeless at being scary, they even befriend the goth teenage daughter, Lydia Deetz, who played the typically sardonic Winona Ryder. Coming across an ad for “Betelgeuse the Bio-Exorcist” in The Handbook for the Recently Deceased, the Maitlands reluctantly call on this infamously mischievous poltergeist. Chaos ensues.

Coming off more conventional starring roles in films like Mr. Mom, Beetlejuice was a surprise career choice for Hollywood star Michael Keaton. Tim Burton’s only previous feature film was the… rather an unusual Pee-Wee’s Big Adventure. But that risky Paul Reubens flick grossed more than $40 million at the box office — against a budget of just $8 million — and set Burton apart as a rising director. However, it was still tough to get Keaton to sign on to a plan as kooky and complex as Beetlejuice.

Michael Keaton revealed to Charlie Rose in 2014 that it took three meetings with Tim Burton to convince him to sign on. Keaton just “didn’t understand what he was talking about.” But Burton was so obviously enthusiastic about Michael McDowell and Warren Skaaren’s screenplay that Keaton continued to discuss the possibility. Eventually, he was convinced. After all, Keaton’s role would only take up 17 minutes total of the sprawling, colorful film. Of course, it was those 17 minutes that set Beetlejuice apart as a unique comedy, thanks to Keaton’s fast-talking caricature of a performance. Keaton’s total transformation surprised audiences everywhere and seriously impressed Burton. When the critical and commercial success of Beetlejuice led to Burton directing the next Batman venture, Keaton was his first choice. Continuing his trend of unexpected casting, Burton also famously hired Jack Nicholson as the Joker.

In addition to grossing $74.3 million at the box office, Beetlejuice won an Oscar for Best Makeup and three Saturn Awards: Best Horror Film, Best Makeup, and Best Supporting Actress for Sylvia Sidney. The early Tim Burton film went on to spawn an animated TV series, a Broadway musical, and even pop-up bars. A Beetlejuice sequel, Beetlejuice Goes Hawaiian, was also written but never produced. (Director Kevin Smith passed, saying, “Didn’t we say all we needed to say in the first Beetlejuice? Must we go tropical?”) As property of the Geffen production company, Burton die-hards still hold out hope that the island project might be fully realized. It seems unlikely, but in this age of reboots and re-makes, who knows. Maybe one day the sequel will be summoned. Beetlejuice, Beetlejuice, Beetlejuice!

WATCH: Winona Ryder opens up about being bullied after starring in ‘Beetlejuice’