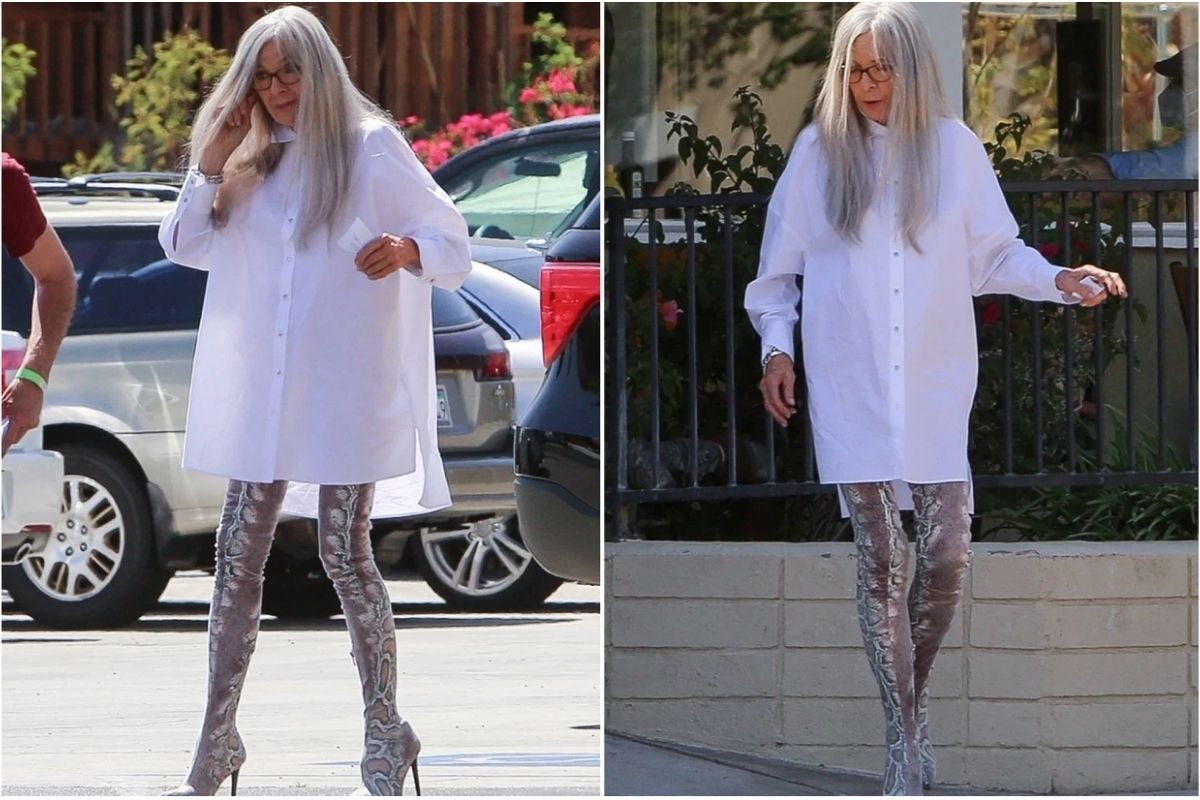 Hollywood icon Diane Keaton‘s style has never been conventional. During the 1970s, as Woody Allen’s muse, Keaton popularized the layered Annie Hall look: masculine vests, bunchy trousers, and kooky hats… though not just anyone could pull it off. And while growing old in the Los Angeles spotlight is never easy, Keaton — now 75 — has aged gracefully, adapting her consistently casual look. Always with the natural hair and semi-tinted glasses, the button-down shirts, and on special red carpet occasions, the sleek suit.

Woody Allen once said that Diane Keaton “dresses to hide her sexuality… she prefers to look old. The way she dressed, I always used to say, is like the woman in Streetcar Named Desire who comes to take Blanche to the institution.” Burn. But that was not the case yesterday when the movie star popped out in Palm Springs looking surprisingly fun and… sultry?

It was quite a shock to fans worldwide when the lifelong bachelorette was spotted in Palm Springs, California yesterday, sporting a wild grey wig and thigh-high snakeskin boots paired with nothing but an oversized white button-down dress shirt. And she looks good! But before you get too excited, no, Keaton is not ditching her classic wardrobe for trendy couture and Rihanna-Esque stilettos. (Later on in the day, Keaton changed into baggy jeans and converse.) In fact, Keaton was filming on the set of her upcoming comedy movie, Mack & Rita. The premise? A young woman named Mackenzie ‘Mack’, played by Elizabeth Lail, falls into a “sound bath regression pod” and pops out a 70-year-old woman dubbed Aunt Rita. Keaton, clearly, is playing Rita in this Freaky Friday send-off.

The plot of the Mack & Rita implies that Keaton’s character is dressing inappropriately for her age. But we think she looks freakin’ fabulous — and social media agrees. The juicy pics have been trending all day, and in my opinion, prove that Keaton should try stepping out of her menswear comfort zone — though pairing the slinky boots with the baggy button-down does feel like an homage to Keaton’s own true style. So it’s safe to say we’re excited to see the rest of the looks she’ll be rocking in Mack & Rita, which also co-stars Taylour Paige and celeb favorite Wendie Malick.

“I think that all people should really dress for themselves, to figure out what they love. To really dress like their own interests and not be afraid of it.”

A Face of Gucci?

“I love style and fashion. I do, I love it… it’s so much fun getting your outfit on. Like ‘Look what you did!’ It’s visual. It’s an art piece, what you’re wearing.”
— Diane Keaton

When Keaton Accepted a Golden Globe for ‘Something’s Gotta Give’… in a Trim White Suit with Matching Gloves!

When She Donated Her Clothes to Goodwill

And Just For Fun: The Classic ‘First Wives Club’ Finale