Diane Keaton, Al Pacino, and Other Celeb Exes Who Worked Together After Breaking Up 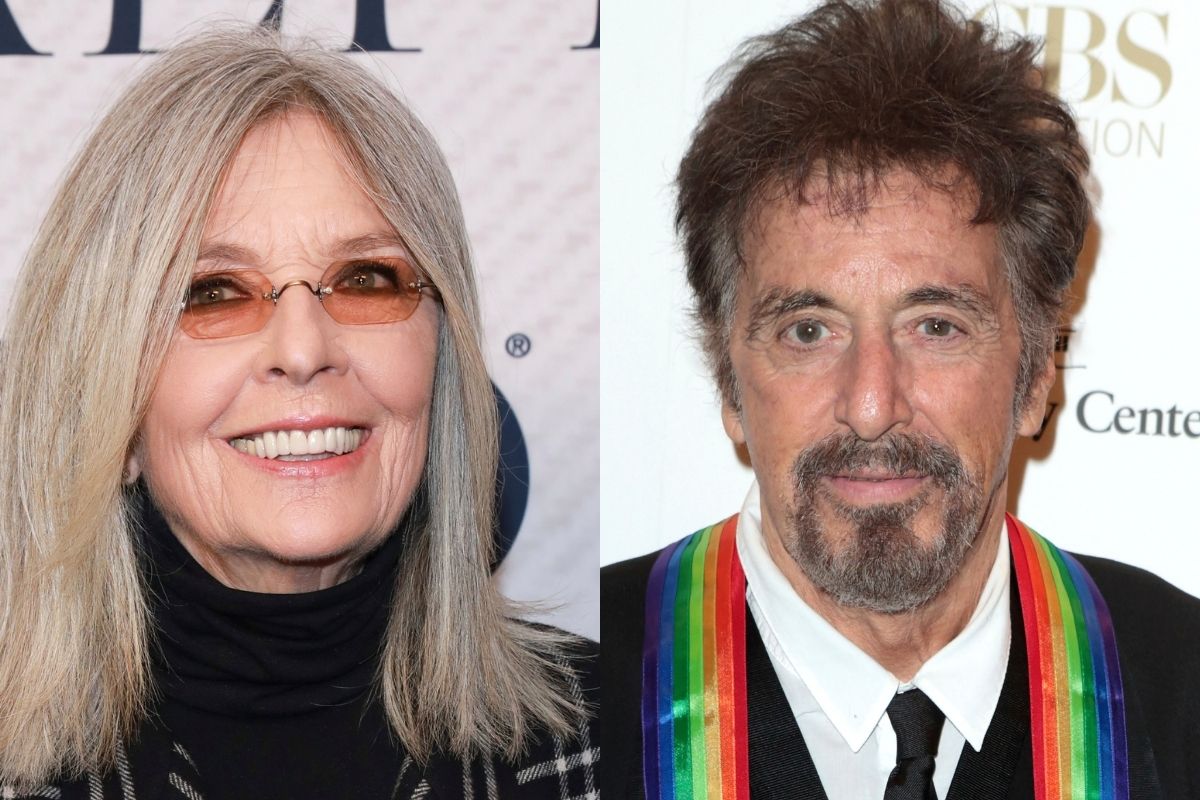 In Hollywood, it’s typical that onscreen romances bubble into something more. Co-stars so often become a real-life love interest, flaunting their love on the red carpet. But what happens when celebs break up… and still have to play the part? Here are 15 celebrity couples who went their separate ways but still had to play nice for the camera.

The two ?90s breakout stars both appeared in the 1998 romance, Shakespeare in Love. Watch above: Gwenyth Paltrow, in her perfect pink gown, accepts the Oscar for Shakespeare in Love from Jack Nicholson. In the speech, she thanks Ben Affleck by name, calling him “a friend.” However, the young couple broke up in 2000 — around the same time as the release of their next film together, Bounce.

Jennifer Aniston dated her Friends co-star, Tate Donovan, IRL but you probably know him simply as “Josh-u-ah” as her character Rachel Green was so fond of saying. Aniston and Donovan met long before he appeared on Friends, and in fact, the couple was breaking up throughout his arc on the show. Donovan told Us Weekly in 2018:

?I was just happy to be on the team. The only bummer was Jennifer and I were breaking up at the time… And so that was tricky to sort of act, and act like we are just meeting each other and falling in love or whatever, interested in each other, when we?re sort of breaking up. That was just tough.?

Sadly, Justin Long and Drew Barrymore could not go the distance. (Get it?) They dated from 2007 to 2009, the same year that He’s Just Not That Into You hit theaters. Both actors featured in the ensemble rom-com, though their characters were not romantically linked. When they reunited to start in the 2010 film, Going the Distance, Barrymore and Long briefly rekindled their relationship but, again, it did not last. The two remain friends, so add Long to the list Barrymore’s warm and fuzzy platonic relationships.

When J-Lo and Marc Anthony broke up, it was a shock to fans. The former couple was married for seven years, and they share twins Max and Emma. But their divorce has not stopped the two performers from collaborating professionally. In addition to co-parenting, they co-hosted Q?Viva! The Chosen in 2012 and in 2016, recorded a Spanish album together.

Jennifer Lopez raved about their unique relationship while on Live with Kelly, saying “At first I was like, we?re good with the kids, but if we start working together, are we going to start going at each other again? … But it?s been awesome. Honestly, I think it?s even helped our relationship and it?s made things even better.?

Amanda Seyfried and Dominic Cooper met on the set of Mamma Mia! in 2008. They starred as the young couple in love at the center of the story. Cooper and Seyfried dated for three years, split in 2011, but reprised their roles as the married pair in the unexpected sequel, Mamma Mia! Here We Go Again.

As Donald Trump so famously (and randomly) shared on his now-defunct Twitter account back in 2012, “Robert Pattinson should not take back Kristen Stewart. She cheated on him like a dog and will do it again–just watch. He can do much better!” The cheating aspect was true. The Twilight co-stars were caught up in a famous whirlwind romance as faces of such the massive vampire franchise. But the romance fell apart when footage appeared of Stewart cheating on Pattinson with married director Rupert Sanders. The scandal ended the relationship, though Pattinson and Stewart remain friends to this day.

As Kristen Stewart mentions in her SNL monologue on the subject (watch above), she is “like so gay dude.” Pattinson, meanwhile, became engaged superstar FKA Twigs but the two broke up in 2017. The upcoming Batman star now dating model Suki Waterhouse.

Jennifer Lawrence and Nicholas Hoult (a.k.a. the boy from About a Boy) met on the set of 2011?s X-Men: Days of Future Past, and dated on-and-off for three years. After finally calling it quits, the actors still had to film X-Men: Apocalypse, and complete an extensive promotional tour for the film. That same year, Lawrence’s nudes (intended for Hoult) were hacked and leaked, causing a worldwide scandal. Poor Jennifer!

In 2017, Nicholas Hoult began dating the model Bryana Holly Bezlaj and in 2018, they had a son. Last year, Lawrence married her boyfriend, art gallerist Cooke Maroney.

Diane Keaton and Al Pacino starred as Kay Adams and Michael Corleone in The Godfather and dated throughout the filming of the trilogy in the ’70s and ’80s. Keaton issued Pacino with a marriage ultimatum — so the story goes. But the Hollywood playboy had no interest in settling down, leading to a heartbreaking split for the iconic power couple. In 2017, Diane Keaton dished to People about meeting Al Pacino on the set of The Godfather:

?I was mad for him. Charming, hilarious, a nonstop talker. There was an aspect of him that was like a lost orphan, like this kind of crazy idiot savant. And oh, gorgeous!?

Neither of them ever married.

After years of dating, Justin Timberlake and Cameron Diaz broke up in 2007… four years before they would co-star in Bad Teacher. But while doing press for raunchy rom-com, it was clear that the actors are still good friends. Timberlake jokingly told E! News that if Diaz had really been his teacher, it “probably would’ve ended up a Dateline special.” Though I don’t think anything, even a break up, could have made the dry humping scene in Bad Teacher anymore awkward than it already was. Watch above, at your own risk.

Early aughts heartthrob Chad Michael Murray married Sophia Bush, his One Tree Hill co-star in 2005… when they were just 24 years old! They announced their separation just five months later and Bush even petitioned annulment, which was denied. Throughout the messy process, both Murray and Bush had to continue acting together on One Tree Hill. Bush opened up about the painful experience in an essay for Cosmopolitan.

Long before falling in love with Ryan Reynolds, Blake Lively dated her Gossip Girl co-star Penn Badgley. The romance between their characters, Dan and Serena, was at the heart of Gossip Girl which remained on-air for five years. That timeline included the ups, downs, and eventual ending of their relationship. While on Bravo?s Watch What Happens Live, Badgley was asked about his best on-screen kiss. His answer? ?I?ll say Blake because we actually had a relationship at the time. And worst? Maybe Blake after we broke up.?

Also: Lively and Badgley the only Gossip Girl co-stars who split while on set. Ed Westwick and Jessica Szohr also dated (and broke up) while filming the show.

Chris Evans and Jenny Slate might seem like a surprising couple. He’s a hunky Marvel star and she’s a quirky stand-up comedian. (For a good laugh, check out Slate’s stand-up special on Netflix, Stage Fright. Or the indie Brooklyn-based comedy Obvious Child.) They met on the set of the 2017 film Gifted and appeared together on Anna Faris’ podcast, Anna Faris is Unqualified. And while they did date, and appeared to be genuinely happy, Evans and Slate broke up for good after about less than two years on-and-off. However, they still appear to be best friends. Evans sweetly told People Magazine:

?She?s my favorite human. She?s the best. I?ve never ever ever met someone in my life who has a mastery of the English language the way she does. She?ll give you one sentence and there?s no fat to it. You?re like, ?You just chose such an unbelievable collection of words that beautifully articulate what you say.? It?s like an art form talking with her, because the visuals associated with her expression are just so colorful. She?s so vulnerable, so honest, so interested in other people more than herself, she?s incredibly compassionate, there?s just nothing to not love about her.?

If you ask me, that’s outstanding coming from an ex.

With so many teens and twenty-somethings on set, it’s really no surprise that most CW and WB dramas lead to real-life romances. On Dawson’s Creek, Katie Holmes played girl-next-door Joey Potter, who gets caught in a love triangle between Percy, played by Joshua Jackson, and Dawson, played by James Van Der Beek. But long before Joey would eventually pick Percy in the famous Dawson’s Creek finale, Jackson and Holmes got together on set. The relationship was kept mainly under wraps, but looking back Holmes has referred to Jackson as her “first love.“

Rumor has it that Charlize Theron ghosted Sean Penn. Seriously. Though Theron and Penn had known each other for years, they did not become involved until filming The Last Face, the 2016 drama that was directed by Penn and starred Theron. Throughout their courtship, both actors looked overjoyed and totally in love, even engaging in some serious PDA. Penn seemed positively smitten, calling her “a director’s dream” and a real “woman” in an interview with USA Today. They were even engaged to be married!

But when it came time to promote their film for the Cannes Film Festival, both Sean Penn and Charlize Theron seemed visibly uncomfortable and cold. Though Theron has denied the story that she ghosted the poor guy. Regardless, working the film fest together was noticeably awkward.

Elizabeth Taylor had seven husbands and eight marriages. That’s right, the violet-eyed vixen married the Shakespearian actor Richard Burton twice: from 1964 to 1974 and from 1975 to 1976. With so many husbands, it’s no wonder that eventually Taylor would work with one of them. She and Burton, a legend of the theater, teamed up years after their second divorce for the 1983 play, Private Lives.

WATCH: Were Ross and Rachel Really on a Break?