The party doesn’t stop until you actually land in jail, and this Florida couple is living proof of it. Aaron Thomas and Megan Mondanaro were arrested on DUI charges after they were spotted riding bikes with no lights and were almost hit by a car. Luckily, a deputy with the Nassau County Sheriff’s office pulled the pair over, saw they had bloodshot eyes, reeked of booze and decided to arrest them. For their safety, and the safety of others, of course.

Thomas and Mondanaro were quickly placed in the backseat of the car, and things got, well, let’s say hot and heavy. These two couldn’t wait to jump each other’s bones so they basically began to have sex right then and there. Oh, the bravery and the nerve.

According to the deputy, he was outside the patrol vehicle writing the arrest report, probably because he himself would get drunk from how it smelled inside, and that’s when he saw the couple began to take their clothes off and the police car started moving. When the officer opened the door, he saw that both of their pants were down.

LOL–ridiculous all!
DUI while riding a bike with no lights on it.
Then, pulled out of cop car while having at it.
Guy briefly ran off.
Cops added "theft" because he had handcuffs on when he ran.
She: $12.5T He: held w/o bail
Really? 🤔

Thomas had managed to briefly runoff, escaping the hold of the deputy who had tried to remove him from the patrol car. Thomas reportedly ran naked through the parking lot with his hands cuffed in front of him, while exposing his junk for the world to see. Luckily, the deputy was able to catch him in a few seconds at the Cold Stone Creamery.

Not surprisingly enough, both have lengthy rap sheets. Thomas previously served 46 days in jail for assaulting a law enforcement officer and Mondanaro served 60 days in jail for a parole violation in connection to a prior conviction. Ah, to be young, dumb, and in love.

Editor’s note: This article was originally published on September 17, 2019. 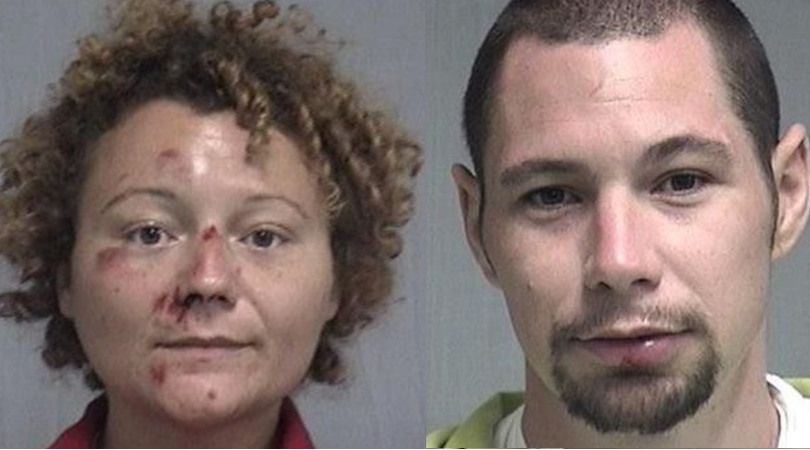