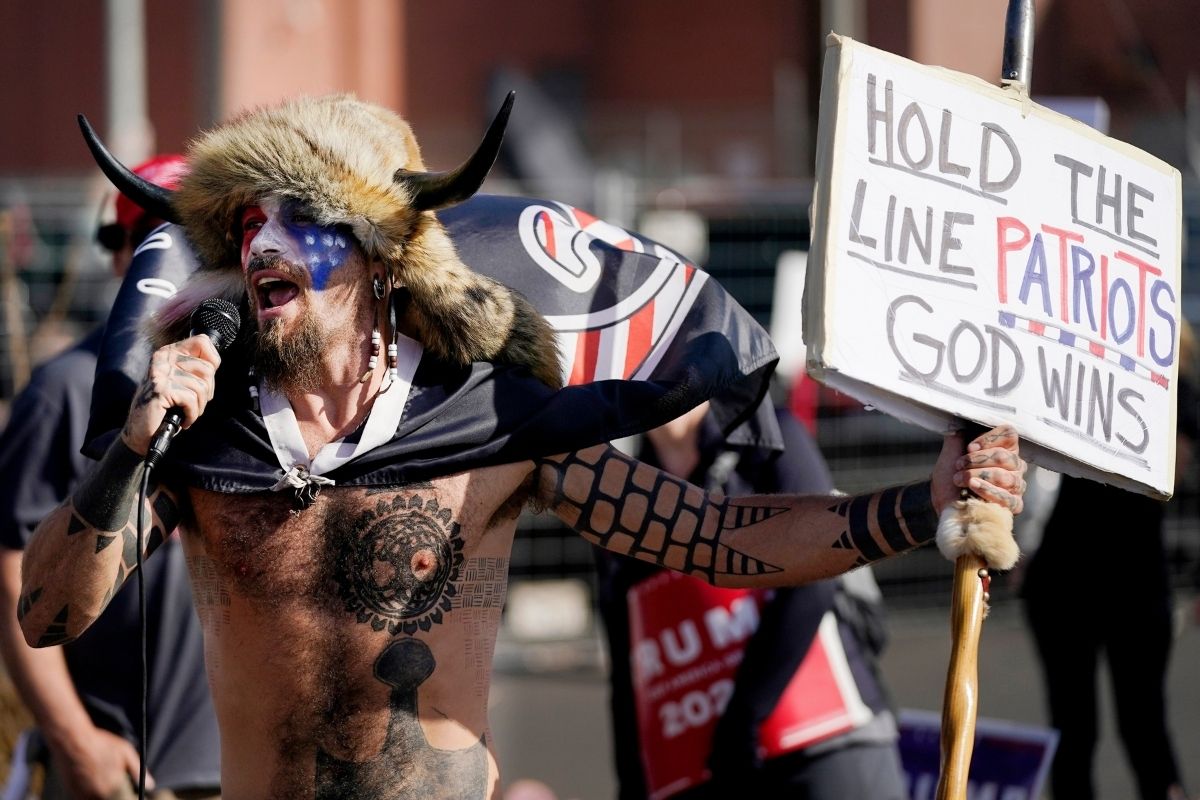 The man who has unfortunately seen recent fame because he wore his infamous horned headdress while storming the U.S. Capitol grounds last Wednesday, cried to his mommy that he hasn’t eaten since Friday because the detention facility won’t feed him all organic food. Jacob Anthony Chansley, also known as Jake Angeli or QAnon Shaman, is from Phoenix, Arizona, and apparently was expecting top-notch gourmet while held in the quarantine section of the detention center.

After returning from Washington, D.C. Saturday morning, Chansley turned himself into the FBI field office. He is charged with “knowingly entering or remaining in any restricted building or grounds without lawful authority and violent entry and disorderly conduct on Capitol grounds,” which are both federal misdemeanors.

The 33-year-old QAnon conspiracy theory advocate is known for appearing in recent pro-Trump rallies in Phoenix over the past few months, wearing a fur hat with horns, tan pants, face paint, and no shirt. But seemingly his interaction with the judge was decently polite, as he informed that he will be able to get a private attorney. He said in an interview with Newsy, “I’m not really all that worried about it because, in all honesty…I didn’t break any laws. I walked through open doors.”

However, in-court on Monday, Chansley’s public defender told Judge Deborah Fine that he was on an extremely restrictive diet, possibly for religious reasons. Her response mentioned that this was “deeply concerning” and ordered that the public defender work with the U.S. Marshal’s Office on the dietary issues. David Gonzales, U.S. Marshal for the District of Arizona told ABC15, “We will abide by the judge’s order,” and added that he will be provided food that follows a shaman’s strict organic diet.

Chansey’s mother, Martha, explained her son’s diet as well, saying, “He gets very sick if he doesn’t eat organic food – literally will get physically sick,? and she remains unapologetic for her son’s shirtless role as one of the rioters in the mass of Trump supporters that broke into the U.S. Capitol building to violently interrupt Congress in the Senate chamber. She refers to her son as a “patriot,” calling him, “the gentlest person I know.”

Look, the Capitol riot is not something to be proud of at all, regardless if you believe President Donald Trump or now President-Elect Joe Biden is the true winner of the presidential election. This is a little ridiculous, as organic food will probably be more expensive. I mean, is he really going to die eating normal prison food? Or is his stomach just going to hurt a little and it’s really inconvenient?

Don’t forget, five people lost their lives that day, including a Capitol Police officer. I think this guy should hold off the theatrics a little bit more.