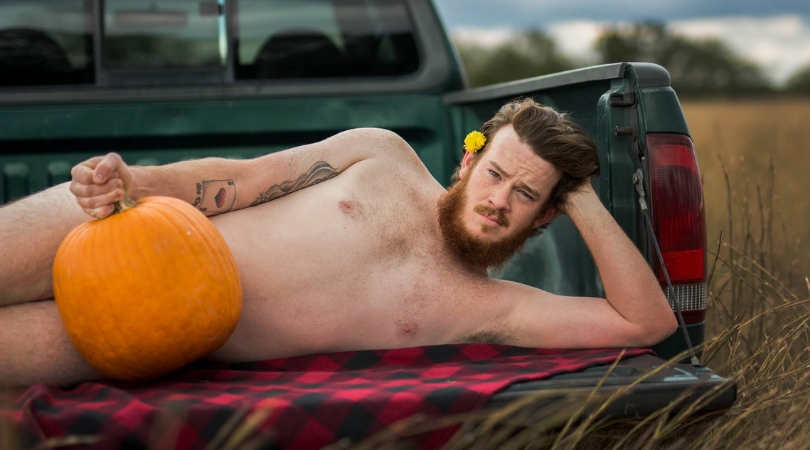 As I was scrolling through Twitter trying to figure out what other pumpking thing I can write about, I immediately stopped everything. There was a man on my screen with a pumpkin on his junk, just staring back at me. That’s when I knew that the Dudeoir shoots were back, and even more hilarious than ever!

In case you don’t know what a Dudeoir is, it is a male photoshoot spoof of the typical female boudoir photography, which have been really popular in the US for quite some time. Just like the female ones, these Dudeoir are said to promote male body positivity and mental health awareness. So, introducing the Pumpkin-themed Dudeoir by photographer Gayla Thompson of GT Photography.

Not only is she the photographer behind it, but she is also the wife of the man posing for the hilarious boudoir. Because well, I’m sure he owed her a favor and this is how she made him pay it back. So, they decided to create the comical #PumpkinButt hashtag to get into that Fall spirit we all love. Talk about couple goals.

Through an interview with the HuffPost, Thompson said that her hubby, Ryan, is “naturally a character” and she wasn’t surprised at how well he was able to pull off the shoot. I mean, just look at the blue stallion look, he is working that camera and he knows it!

What shyness? He is rocking nothing but rolled up boxer briefs and series of strategically placed pumpkins…with a bottle of Bud Light on the side, of course. As expected, the photoshoot quickly went viral on social media after she posted them on her Facebook Page, as several commended the couple for keeping that “spice” in their relationship.

The photographer said she initially had some ideas for the bearded man to follow along, but once the couple got going, he had a mind of his own and began to pose with no direction. Calvin Klein, you need to hire this man for all photoshoots and pronto. Starbucks, you too. Introducing the new face of the Pumpkin Spice Latte.

Ladies, if your man isn’t willing to bend down, strike some very sensual poses during the winter with a pumpkin covering his butt and his junk, it’s time to get a new man.

Dudeoir photoshoots should definitely be a thing year-round.