Were Ross and Rachel Really on a Break? 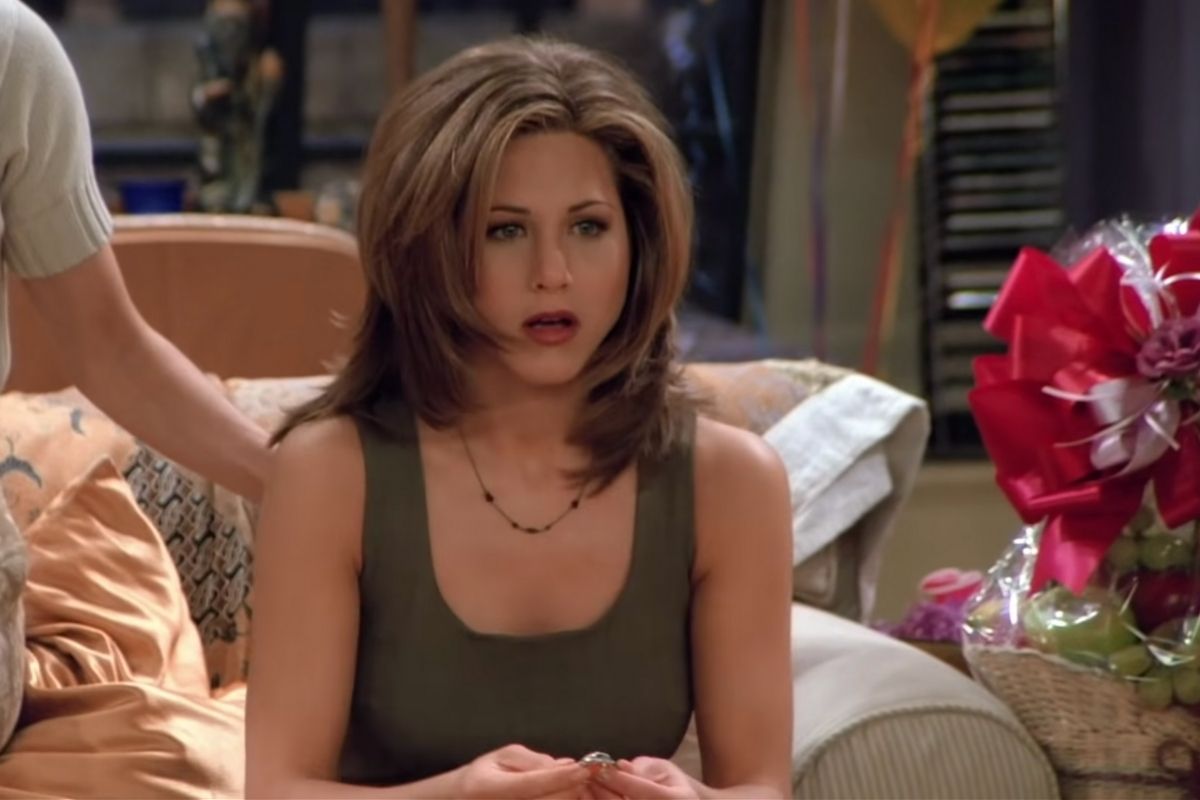 To determine whether or not Ross and Rachel and were really on a break, it’s important to consider the circumstances which led to the couple’s first blowout fight, in which Rachel infamously uttered: “Maybe we should just take a break.” When she explains — “A break from us” — Ross storms out of the apartment without another word. But it’s what Ross does next that has had Friends fans obsessing over this break up for the next 23 years (and counting)!

Why Were Ross and Rachel So Mad?

Before digging into the 1997 Friends episode “The One Where Ross and Rachel Take a Break,” we must remember what led this couple to their nasty fight. Ross Geller (David Schwimmer) had been lusting after Rachel Green (Jennifer Aniston) ever since she burst into the gang’s New York City coffee shop during the sitcom pilot and propelled herself to this iconic, codependent core of friends: Monica Geller (Courteney Cox), Ross, Chandler Bing (Matthew Perry), Joey Tribbiani (Matt LeBlanc), and Phoebe Buffay (Lisa Kudrow). Having grown up in Long Island with the Geller siblings, Rachel always knew Ross as Monica’s geeky older brother. But even as teens, Ross carried a torch for the spunky cheerleader. As adults, his mooning over Rachel essentially continues until the two finally shared their first kiss in “The One Where Ross Finds Out.”

Despite simmering romantic tension, the problems between Ross and Rachel begin almost immediately. After they finally hook up in Central Perk, Ross must decide between Rachel and his current girlfriend Julie. Ross drags out the decision-making process, hemming, and hawing ad nauseam as if he has not been obsessed with Rachel Green since hitting puberty! He even writes a nasty pro-con list comparing the two women, with Rachel finds and is rightly furious. It’s no way to begin dating. Point one: Rachel. After eventually forgiving Ross for this initial betrayal, Ross proceeds to whine jealously over Rachel’s friendship with her co-worker, Mark. Mark! Even hearing his name annoys me after countless, dragging scenes where Ross croaks Mark like a broken record. Ugh. Rather than appreciate the literal love of his life, Ross erodes their rocky relationship through insurmountable insecurity. By the time Rachel suggests taking a break, viewers are also due some time away from this insufferable paleontologist.

Ross Sleeps with the Copy Girl

Without responding directly to Rachel’s outburst, Ross leaves the apartment. It’s admittedly unclear, in that moment, whether the couple had truly broken up. In refusing to communicate a response, Ross leaves the relationship temporarily open-ended — it’s anyone’s move. And a move is what he makes. Getting sad-drunk at the bar with Joey and Chandler, Ross runs into the cute girl who works at the copy place. The guys often frequent the shop, faking xerox emergencies to catch a glimpse of Chloe’s belly-button ring. Ross and Chloe drunkenly sleep together but a call from Rachel the next morning sends Ross into a frenzy.

He frantically hides Chloe behind the door — the door! — while making nice with his girlfriend. What a jerk; he’s lucky that Chloe is so insanely chill. Rather than come clean, Ross spends much of “The One with the Morning After,” running around town asking acquaintances to cover for him. But Rachel finds out anyway. So Ross must accept responsibility… or so you’d think. The fight that ensues is pretty legendary. The best line? “YOU THINK YOU’RE GOING TO GET OUT OF THIS ON A TECHNICALITY?!”

What Do You Think?

Obviously, David Schwimmer has his stance on the matter. There’s no hesitation when he tells Jimmy Fallon: “It’s not even a question. They were on a break.” But considering the intertwined history of these two characters, I have to disagree. Ross is simply too defensive of his actions. Once fully realizing his five-word alibi — WE WERE ON A BREAK! — nobody hears the end of it. The excuse becomes a mantra for Ross who, even if he’s not a cheater, is a sniveling sad sack of a boyfriend. When Ross stormed out of Rachel’s apartment on their ruined anniversary, their love life was not DOA. At least not yet. But the choice he made — and Rachel’s subsequent choice not to forgive him — damn the couple for several seasons. By refusing to budge an inch, never even admitting that he might have cheated, Ross only encourages Rachel to stubbornly stand her grand. Their mutual refusal to compromise said what we were all thinking: it was time for a break.

In the past few years, the topic of Ross and Rachel’s on-again, the off-again affair has garnered new enthusiasm. Almost everyone has an opinion on the matter thanks to Netflix, which introduced Friends to a new generation of TV watchers. But that easily binge-able era has come to an end. In 2020, HBO acquired the rights to the NBC sitcom and it was promptly removed from the familiar platform. Now solely available through HBO Max, Friends is an early staple of the new streaming platform. While the reinvigorated fan base laments the Netflix loss, many fans have already hopped a ship to HBO Max. And soon, the long-awaited Friends reunion will air on this site. Production was halted due to the Coronavirus pandemic, but the Friends Reunion Special now is scheduled to premiere in March 2021. Who knows what the continuation of the Ross & Rachel storyline has in store. Maybe… divorce? (I can hear it now: WE WERE SEPARATED!)

WATCH: Matthew Perry will always be the funniest member of “Friends,” and these bloopers prove it