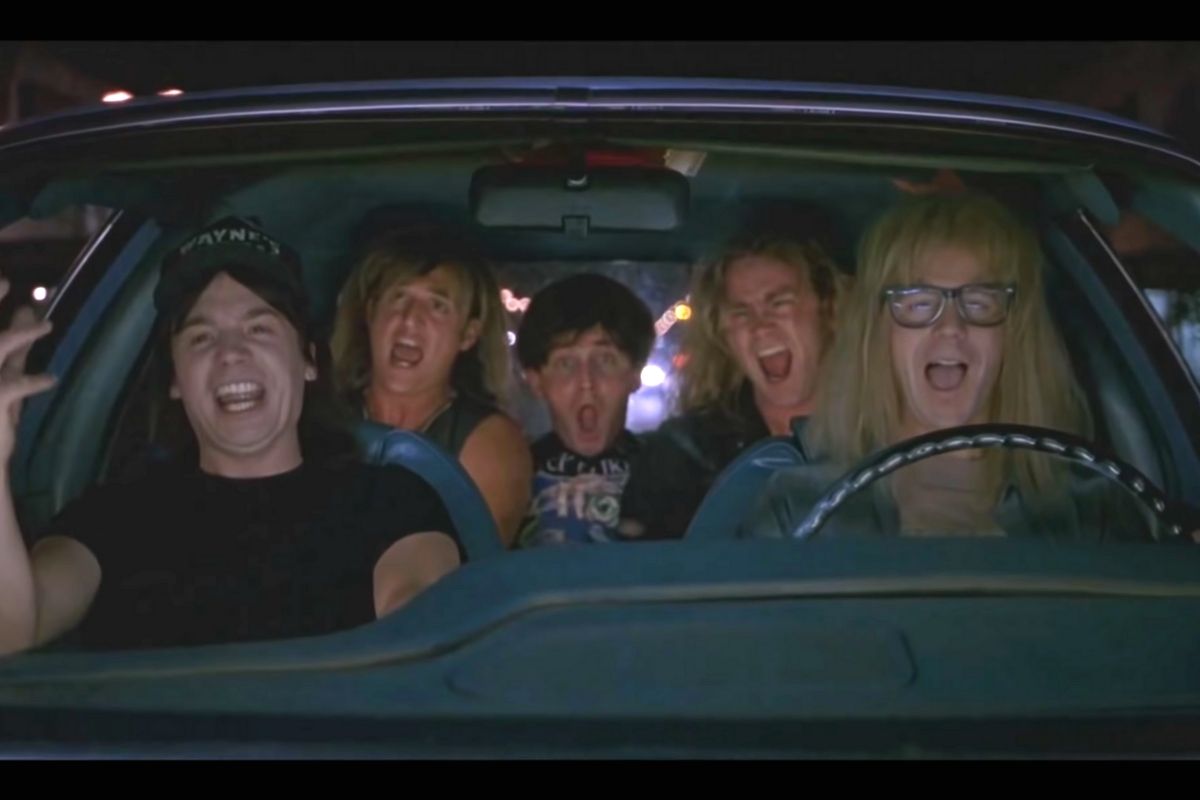 Wayne’s World turned 29 years old this week. As the second instance of an SNL skit spinning off to the big screen — The Blues Brothers in 1980 was the first — Wayne’s World was a historic success for young stars Mike Myers and Dana Carvey. Although the movie was produced by the Saturday Night Live showrunner Lorne Michaels, Myers retained almost complete creative control — even trumping director Penelope Spheeris in many instances.

In fact, Spheeris wanted to bypass “Bohemian Rhapsody” altogether for the iconic lip-synching scene in Garth Algar’s car. This led to a major clash behind-the-scenes. Eventually, Myers put his foot down: “‘I?m out. I don?t want to make this movie if it?s not Bohemian Rhapsody,'” he told Rolling Stone.

Mike Myers grew up outside of Toronto, Ontario in Canada. As he described in a 1990 interview on CBC, the group of friends he hung around with — mischievous, overstimulated rock band types — “sort of an adolescent, suburbia heavy metal thing” — provided the real-life basis for Wayne Campbell. This character, an enthusiastic twenty-something metal head who lives in his parents’ basement, went on to become a boon of 90’s pop culture.

Contrary to popular belief, the character of Wayne Campbell did not originate on Saturday Night Live. Prior to joining the New York-based sketch show in 1989, Mike Myers appeared on Canadian TV and debuted the first version of Wayne on Citytv. Wayne Campbell then appeared again in a music video for the band Ward’s “Boys and Girls.” Eventually, Wayne earned his own slot on CBC Television in It’s Only Rock & Roll: Wayne’s Power Minute. This low-fi production became a prototype for Wayne and Garth’s fictional cable access show: Wayne’s World.

Wayne, and his kooky world, was deeply personal creations for Mike Myers. So as the premise snowballed into a larger Hollywood production with a $20 million budget, Myers tried to assert himself on-set. This led to heated arguments between Myers and Wayne’s World director Penelope Spheeris. Spheeris wanted to use a Guns N’ Roses song at the start of the film, when Wayne and Garth are cruising through Aurora, Illinois in AMC Pacer packed with their head-banging buddies. Spheeris didn’t understand why a group of self-ascribed “headbangers” would be jamming hard to Queen while hanging out. But of course, Myers recognized the comedic gold of the moment. When he joined Spheeris in 2015 for a special Rolling Stone interview, Myers explained that the unusual, operatic rock song is “inherently” funny.

Although Penelope Spheeris doesn’t exactly remember the conflict surrounding the song choice, Mike Myers insists that he was extremely demanding when it came to shooting that scene. (Spheeris was not asked back to direct Wayne’s World 2 the following year, a decision which many fans suspect had with tensions between the director and the leads.) Like most of Wayne’s World, the Bohemian-Rhapsody-scene was shot in California, driving along the streets of West Covina late at night. Myers envisioned the scene as a “mini-opera” in and of itself, as the friends experienced the suburban sights through the windows of Garth’s car, eventually finding their drunk friend (played so hilariously by Sean Sullivan). Literally: ?I see a little silhouette-a of a man.?

But there’s one thing that everyone remembers: their necks hurt after filming all night long.

The Resurgence of “Bohemian Rhapsody”

If you have ever been in any car when “Bohemian Rhapsody” comes on, then you?ve experienced the communal power of Queen?s cuckoo, erratic beast of a rock song. The six-minute, stand-out single off 1975’s A Night at the Opera is weird. Theatrical. Transcendent. Freddie Mercury?s lyrics tell a fractured story that begins with a young man committing a regrettable murder. From there, everything spins out of control: high keys dip to low registers, Mercury?s role splits into a full band harmonization, a cappella verses bounce back and forth, chimes are deployed, and nonsense is declaimed. That’s a fitting summary, too, of Wayne’s World: a highly textured (and totally silly) pastiche of a film. Using a maximally imitative format, both Wayne’s World and “Bohemian Rhapsody” are collages in their medium.

They’re also both underdog productions that shockingly turned a massive profit. Wayne’s World made $180 million at the box office, earning nine times the original budget. That commercial success, in turn, sent ?Bohemian Rhapsody? surging to the top of the Billboard charts for the first time in almost two decades. The 1975 song soon rose to #2 on the pop charts. Sadly, Freddie Mercury was not alive to witness that delayed success. He died of AIDS just three months before Wayne’s World premiere in 1992. However, Queen guitarist Brian May has described showing an early cut off the film to his friend, who was dying a slow and painful death. The weakened Mercury reportedly “laughed and laughed” at the scene. May said: “He was very weak, but he just smiled and laughed, and said ‘Yeah, how wonderful is that.’?

In 2018, Mike Myers made a (nearly unrecognizable) cameo in the celebrated Freddie Mercury biopic, Bohemian Rhapsody. Playing the unconvinced EMI Records exec Ray Foster, Myers was able to honor the late lead singer who he so admired. Myers emerged from his semi-retirement to accept the role, and it was worth it just to deliver this ironic line alone: “What you need is a song that teenagers can get in their cars and bang their heads to, and that song is not ‘Bohemian Rhapsody.'”