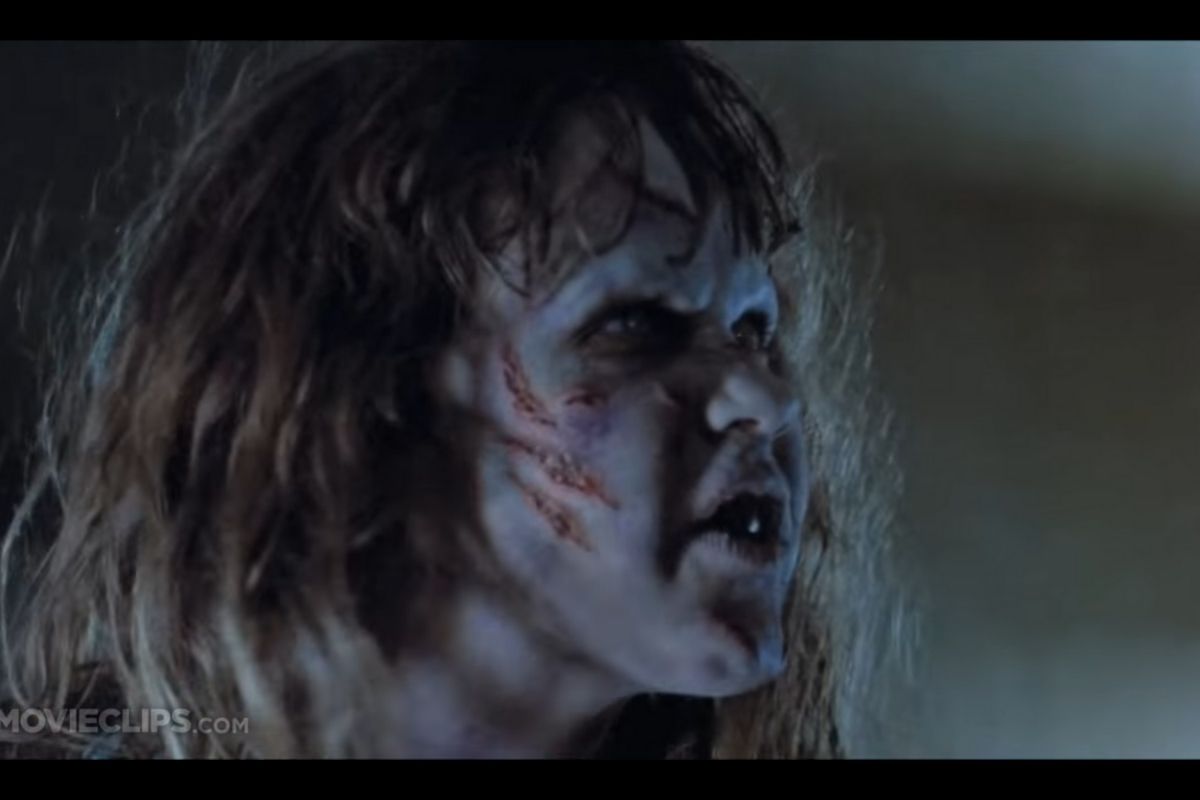 The first time I watched The Exorcist was at a seventh grade sleepover. The ghastly girl on the screen was no older than us, and every spin of her head, every snap of her neck, sent me and my friends into hysterics. We were sliding off the couch screaming with fearful delight as little Regan spoke with the ancient groan of evil spirits.  Although aspects of The Exorcist seem corny now, the potency of Linda Blair’s unhinged performance certainly persisted through the decades. Blair was just 14-years-old when The Exorcist premiered in 1973. Her acting as Regan, the youngster possessed by the devil, drove even adult audiences into a frenzy; reports of viewers passing out, vomiting, and even fleeing theaters dominated headlines following The Exorcist‘s release.

Conservative efforts were made to ban the film, leading to a national discourse surrounding its Christian themes. But that didn’t stop The Exorcist from becoming the first horror film nominated for an Academy Award for Best Picture. The Exorcist is now recognized as a milestone in film history but Linda Blair ? the teenage girl at the heart of all the controversy ? was condemned for her role. For her (supposed) role in the glorification of Satan, Blair was targeted with fanatic death threats. This created an environment of fear for the young actress which lasted long after the hullabaloo of The Exorcist died down.

The Exorcist follows the story of Chris MacNeil (played by Ellen Burstyn) and her daughter, 12-year-old girl Regan MacNeil, who exhibits frightening behavior after playing with a Ouija board. Poltergesit shenanigans rage through their Washington D.C. home while Regan slips further away from her usual self: vulgar swearing, violent shaking, and creepy musings overtake the girl. Believing that Regan’s issues are psychological doctors recommend an exorcism as a kind of placebo.

Regan’s demonic activity then worsens. Now convinced Regan is truly possessed, Father Karras (played by Jason Miller) and Father Merrin (played by Max von Sydow) try to manipulate the demon inside of her. But the devil taunts them right back, breaking Karras down and leaving Merrin to continue the exorcism alone. When Merrin succumbs to a heart attack, Karras reappears to try to wrestle the dark power out of Regan directly; it transfers into him instead and Karras is forced to sacrifice himself. Soon cured, Regan returns to her normal self and prepares to leave for Los Angeles with her mother. She cannot remember her possession but displays a new awareness for the spiritual realm at the film’s close.

In order to stage such a provocative exorcism, Director William Friedkin insisted that Linda Blair authentically commit to the most physically demanding challenge: the exorcism scenes. As such, Blair’s emotional duress began while filming — long before she realized what a violent effect the film might have on spectators. With the temperatures on set near-zero to portray Regan’s cold, breathy nightmares, Blair was stuck in nothing but nightgown throughout the shooting. The harness required for Blair’s inhuman thrashing also left Blair with spinal pain.

And that’s not all; the production of The Exorcist was plagued with tragedy. First, a fire burned down the set which set production back for weeks. Then the actors who portrayed Burke Dennings and Father Karras’ mother, Jack MacGowran and Vasiliki Maliaros, died suddenly before the film’s release. (Both of their characters died in the film as well.)

All of this could be enough to traumatize a young teen. But then The Exorcist hit theaters and the box office success opened up complex discussions about Catholocism and demonic possession. This horror classic was the first mainstream possession movie — now a well-trodden horror sub-genre — and the scares appeared through the careful building of a psychological drama. Rather than battle an outside force, like a werewolf or vampire, William Friedkin built a world where the villain was always internal. The Exorcist is not a true story. But paired with cutting-edge special effects, the on-screen exorcism process terrified audiences using, quite literally, the fear of God. Placing Linda Blair, the picture of innocence, into such unsettling and adult scenarios, warranted petitions that the Warner Bros. give their film an X-rating. (They did not comply, but these requests definitely added to the immoral allure of The Exorcist.)

Due to the panic incited by The Exorcist, Linda Blair’s real life was turned upside down. But unlike Regan MacNeil, she could not just snap out of it and forget. Blair was tortured by an onslaught of anonymous death threats for her extreme performance. More than just a horror movie, The Exorcist became a cultural hotbed in the nationwide Satanic panic. Instead of being celebrated for her nuanced presentation of a difficult character, Blair was made to feel afraid; police bodyguards were hired in her home. Forced to defend herself in interviews and present like a normal teenage girl, Blair was pelted with impossible questions. “When the movie came out, the amount of pressure that came down on me wasn?t anything I was prepared for,” she’s said of the experience. “Especially all the pressure the press put on me- they thought I had all the answers about faith and Catholicism.” Obviously, Blair did not. But her public treatment does get at just how confounding this violent, internal film was for the nation.

Linda Blair was, at the very least, recognized with a Golden Globe and an Academy Award nomination for Best Supporting Actress. (Although she did not win, The Exorcist picked up two Oscars that year: one for sound and one for screenwriter William Peter Blatty.) However, these honors did not cement Blair’s place in Hollywood. Although she reprised her role as Regan in Exorcist II: The Heretic, Blair’s acting career is sporadic. Throughout the 1970s, she starred in the TV movies Born Innocent and Sarah T. ? Portrait of a Teenage Alcoholic then branched into the mainstream with Roller Boogie in 1979. Throughout the 1980s, Blair dated a number of high-profile musicians, including Rick Springfield, Deep Purple bassist Glenn Hughes, Styx guitarist Tommy Shaw, most notably, Rick James.

In his memoir Glow: The Autobiography of Rick James, James expounded on their relationship: “Linda was incredible,” he writes. “A free spirit. A beautiful mind. A mind-blowing body. She liked getting high and getting down as much as I did. We posed topless for a photograph that showed up everywhere. We didn’t care. We were doing our own thing our own way. It was a love affair that I hoped would last. It didn’t.” James also revealed that his hit song “Cold Blooded” was about the Exorcist star, composed after learning she’d gotten an abortion without telling him.

These days, Linda Blair keeps busy with animal rights philanthropy. She’s been an outspoken vegan since 2001. In 2004, she founded the Linda Blair WorldHeart Foundation, a non that rehabilitates rescue animals. In the aftermath of Hurricane Katrina, Blair traveled to Mississippi to save 51 abandoned dogs.

Watch: I Did a Ouija Board on Al Capone?s Grave, This Is What Happened