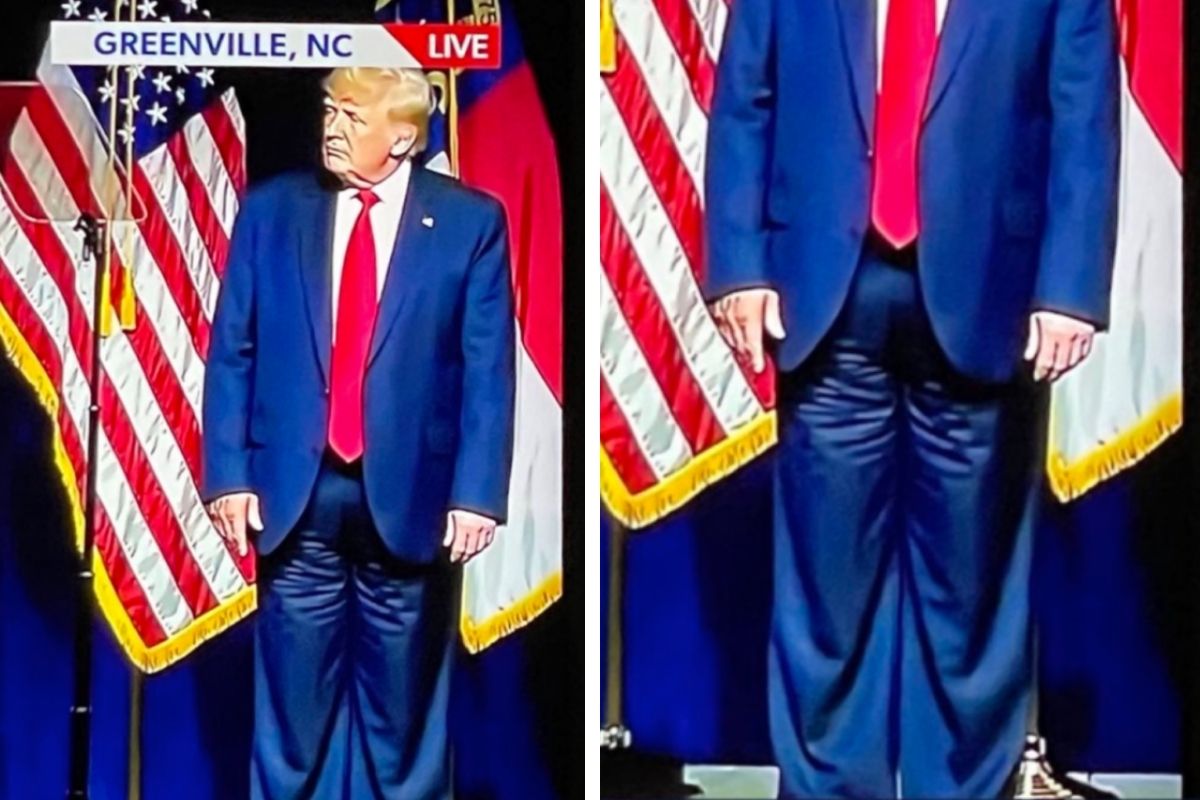 The Internet truly enjoys forgoing what politicians are actually saying, and instead, finds entertainment in the mishaps that politicians go through while they’re speaking in front of crowds. Rudy Giuliani was under the spotlight for a significant amount of time, not only because of what he was saying but what he was going through while speaking. In a whirlwind of accidental farts, bad hair dye jobs, and controversial movie scenes, Giuliani was heavily (and hilariously) criticized. And as we all know, former President Donald Trump isn’t exempt from the same hilarity.

Is Donald Trump Wearing HIs Pants Backwards in This Video?

Others are noting this, but it can't be shared enough: Donald Trump gave his big speech today with his pants on backwards. Look close and tell me I'm wrong.pic.twitter.com/sRsoJVfyf8

On Saturday, Trump appeared at the Republican party convention in North Carolina, where, according to the Independent, he was making claims that China needed to “pay reparations” for the coronavirus pandemic. But what people were really paying attention to was not the accusations on an entire country, and rather on what Trump was wearing. If you look closely at the pictures, you can see why people were pointing out that Trump, apparently, was wearing his pants backwards.

Now is there confirmation? Not exactly, as we wouldn’t know Trump’s personal dresser (if he has one?), but people on social media made the ultimate decision that his pants were in fact backwards. Twitter users would point out that there weren’t any seams, zippers, and pockets, all while Trump is trying to make a valid point in his speech. The pictures took off so much that the hashtag #TrumpPants actually started trending on the platform.

People started taking the pictures and creating the funniest memes that just promoted his pants over his own China rant. One person took it upon themselves to create a diagram explaining “Trump’s Backward Pants” and another even went as far as to identify where Trump’s fly went, only to bring back the infamous meme of when former Vice President Mike Pence had a fly land on his head during his debate with Vice President Kamala Harris.

Where the Fly on Trump’s Pants Actually Went

No fly on Trump's pants? I think I know where it went. pic.twitter.com/awYKdoxVFT

Others confirmed the allegations of Trump wearing his pants backwards with their own analyses of why they believed so. One said, “His pants are definitely on backwards. There is no fly and the creases are those found at the back of the legs,” while another joked, “The only reason I can think of why he’d do that is if he p***** his pants in the front and it would really show up!”

His pants are definitely on backwards. There is no fly and the creases are those found at the back of the legs. The only reason I can think of why he'd do that is if he pissed his pants in the front and it would really show up!

Nevertheless, a fact-checking article done by Snopes confirmed that the former POTUS did in fact have a zipper in front of his crotch area, proving all speculators wrong.

Watch: A Conversation That Definitely Did Not Happen on Omaha Beach