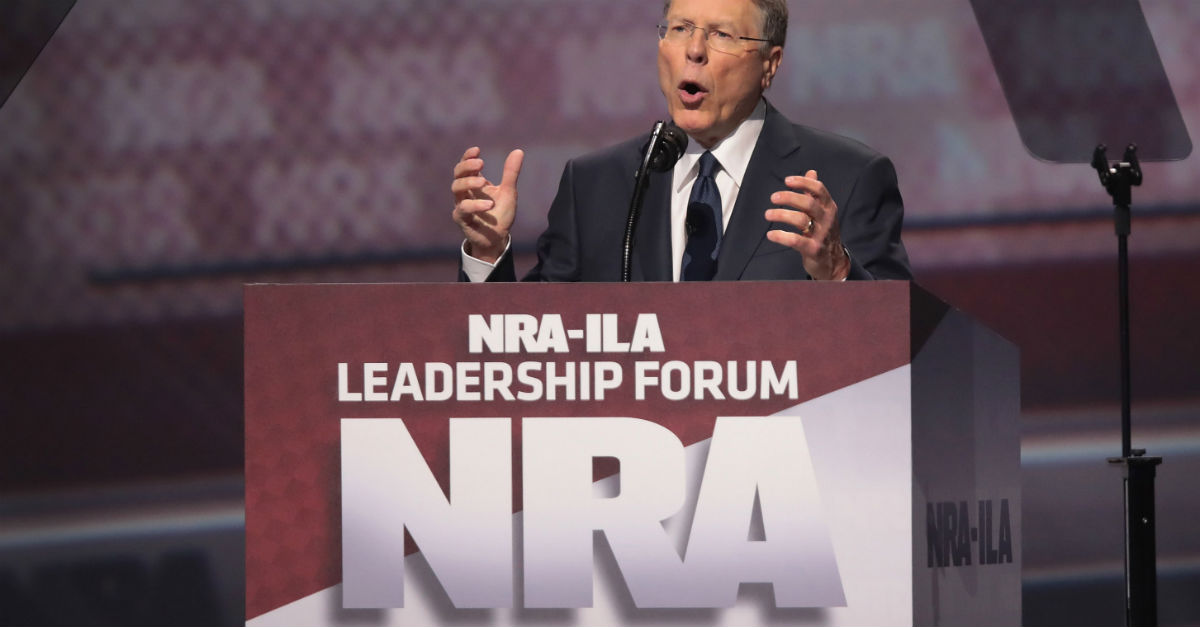 Scott Olson/Getty Images
ATLANTA, GA - APRIL 28: Wayne LaPierre, executive vice president and CEO of the NRA, speaks at the NRA-ILA's Leadership Forum at the 146th NRA Annual Meetings & Exhibits on April 28, 2017 in Atlanta, Georgia. The convention is the largest annual gathering for the NRA's more than 5 million members. (Photo by Scott Olson/Getty Images)

The National Rifle Association took the time to stand up for its “law-abiding members” in their official response to the businesses who have since decided to cut ties with the organization following public outcry.

Over the weekend, activists helped the #NRABoycott hashtag trend on Twitter. Several companies responded to the social media activism by severing their ties with the Second Amendment nonprofit. Delta and United Airlines, for example, tweeted that they would no longer offer discounted flights to NRA members to travel to their yearly meeting.

A running list of the various organizations who have split from the NRA, as well as those still with the organization, has been making the rounds on Twitter, though the list below is already out of date, as TrueCar has recently joined the exodus.

UPDATED: The NRA is being supported by these companies

That's a lot of red lines.

Responding to the social media outcry, the NRA released a statement defending its members.

The organization accused the departing businesses of “punishing” the group’s 5 million members, “who are doctors, farmers, law enforcement officers, fire fighters, nurses, shop owners and school teachers that live in every American community.”

In a stunning move, the NRA criticized law enforcement, saying, “The law-abiding members of the NRA had nothing at all to do with … the cruel failures of both federal and local law enforcement.” This was written in reference to disturbing revelations that the FBI did not act even after it was warned of the suspected shooter’s intention to cause a mass casualty incident as well as revelations that at least four Broward County sheriff’s deputies, including the resource officer assigned to the school, did not enter to engage the shooter while the shooting was taking place.

The NRA called the businesses’ decisions to cut ties “a shameful display of political and civic cowardice.”

“Let it be absolutely clear,” they concluded. “The loss of a discount will neither scare nor distract one single NRA member from our mission to stand and defend the individual freedoms that have always made America the greatest nation in the world.”

The full statement is available for viewing below.

NEW: The National Rifle Association responds to the growing number of companies ending their corporate partnerships since the Parkland school shooting: "Some corporations have decided to punish NRA membership in a shameful display of political and civic cowardice." pic.twitter.com/Wnabe0GFea

RELATED: These are the heroes who entered the scene of a school massacre when others did nothing