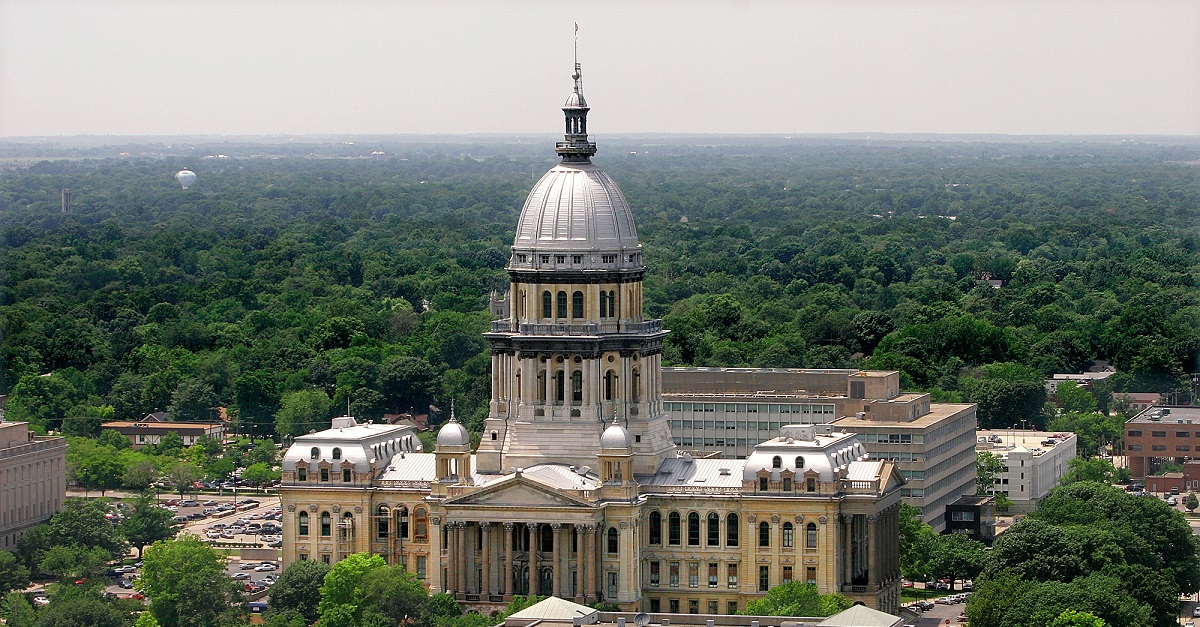 AP Photo/Seth Perlman
** ADVANCE FOR SUNDAY, JUNE 25 ** The Illinois State Capitol in Springfield, Ill., shown Wednesday, June 21, 2006, measures 361 feet to the top of its familiar dome. The neck-bending skyscrapers that pack Chicago's fabled skyline are little more than scaled-down miniatures in downstate cities, where even the tallest buildings are at least three times shorter than the Sears Tower and John Hancock Center. (AP Photo/Seth Perlman)

Following national outcry for stricter gun control around the country multiple bills have been introduced in the Illinois House and Senate.

The first one to be passed is a ban on the bump stock modification that alters a semi-automatic weapon into an automatic. The bill was voted in favor by a vote of 83-31 in the House, writes WGN Chicago.

RELATED: Florida just made big changes to gun laws, including armed teachers, but gun advocates won’t like all of it

Last fall, the Illinois Senate failed to pass a bill banning bump stocks following the Las Vegas mass shooting with a vote from 54-48.

At the time, State Representative Emanual Welch, D-Hillsdale said, “This device is not needed and the time to act is now. But for the grace of God, that could have been any one of us. Any one of us. And if it happened in Chicago, we know this discussion would be completely different.”

At the time Massachusetts and California were the only two states to have banned bump stocks. Even President Trump has signed off on the idea that bump stocks need to be banned across the country.

Perhaps that is why even some Illinois Republicans have come around when the vote came up this time. “Assault weapons have one purpose — to inflict maximum injury and death,” said David Harris, R-Arlington Heights. “You pull the trigger and the bullets keep coming out until the magazine is empty. No one needs this device to hunt deer or duck.”

Chicago Police Superintendent Eddie Johnson was in Springfield to show his support for some of these bills.

“I am all for Americans who have legal rights to own firearms only, but you can not convince me that high-capacity magazines are needed in the city,” said Johnson. “As a legal gun owner, you can’t convince me you need an AR-15 in the streets of Chicago, you just won’t convince me of those things.”

The second bill passed prohibits anyone under the age of 21 from buying an assault weapon such as an AR-15. That bill passed 64-51.

Walmart, considered one of the largest retailers of gun and ammunition nationwide, has also changed their policy so as not to sell firearms to anyone under the age of 21.

Dick’s Sporting Goods has also prohibited the sale of guns to anyone under 21, as well as ending sales of assault-style rifles and high-capacity magazines.

RELATED: Illinois gun ban law by nearby parks issued to be unconstitutional

Another bill that is up for discussion in Springfield would ban the sale of body armor and high-capacity magazines to anyone who is not a police officer, licensed security guard or member of the military. The bill is to be named after slain police officer Paul Bauer.

The suspect who was charged with the fatal shooting of Bauer was wearing body armor at the time. It is a felony to wear body armor while committing a crime in Illinois.