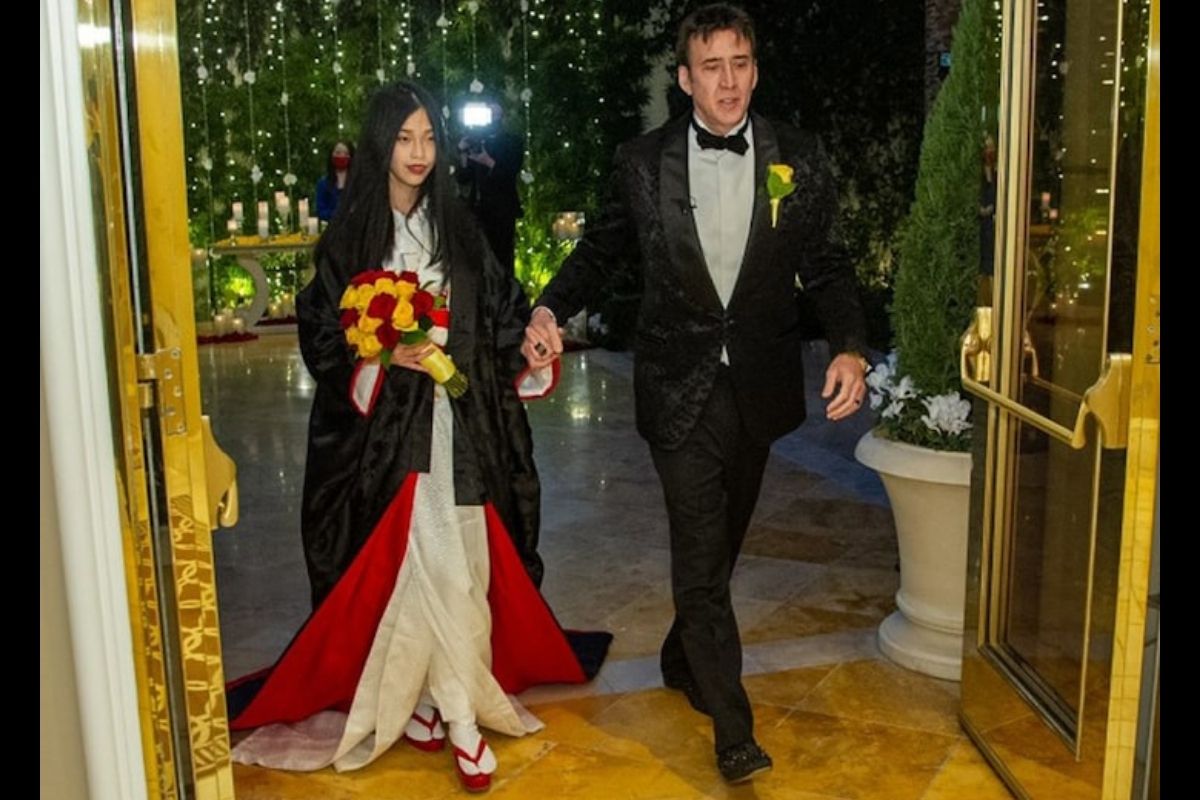 Nicolas Cage has tied the knot… again! News broke over the weekend that on February 16, the actor married his 26-year-old girlfriend Riko Shibata. It was an intimate affair, held at the Wynn Hotel in Las Vegas. For Cage, the event marked his fifth marriage. His previous wedding, in 2019 to Erika Koike, (infamously) lasted only four days. By those standards, this latest union is already a success!

Nicolas Cage is an intense, prolific, at times volatile, actor. And it seems his romantic reflects those varying values of commitment. In 1990, Cage had a son, Weston Coppola Cage, with actress Christina Fulton. They never married, but since then Cage has been married five times. He and actress Patricia Arquette married in 1995 and divorced in 2000. Then he married Elvis’ daughter, Lisa Marie Presley. The two filed for divorce just 107 days later.

Nicolas Cage married his third wife, Alice Kim, in 2004. Their son Kal-El was born in 2005. The same year, they divorced. For the next fourteen years, Cage remained unmarried and it seemed that his attempts at the institution were behind him… until Cage married makeup Erika Koike — in Las Vegas — in 2019 and filed for annulment just four days later. Reportedly, Cage claimed he was too drunk when he agreed to get married. (LOL.) So it seems surprising that Cage chose another Las Vegas, Nevada venue for his wedding last month, to girlfriend Riko Shibata.

Unlike Nicolas Cage’s previous flames, Riko Shibata is not from the high-profile world of Hollywood, California. The couple met in 2019 in Shiga, Japan. And despite their 31-year age gap, they seem like a great match; Shibata appears to share Cage’s unique and quirky tastes. Cage described their engagement on his brother Marc Coppola‘s radio show last August — he popped the question over FaceTime — and said that he bought Shibata a customized black diamond engagement ring. Her favorite color is black, the National Treasure actor explained on-air.

So it’s fitting that Riko Shibata wore a black handmade K+Japanese bridal kimono, designed by Kyoto on her special day, paired with traditional Geta flip-flops and tabi socks. (So cool.) Nicolas Cage wore a Tom Ford tuxedo, and the pair looked stunning on February 16, at Las Vegas’ Wynn Hotel. The date was chosen in honor of Cage’s late father’s birthday. Cage’s publicist described the intimate wedding to the press, saying the couple recited ?traditional Catholic and Shinto vows with poetry from Walt Whitman and Haiku sprinkled in.” Personally, I would love to see a video of how Nic Cage interprets a Shinto-Catholic crossover. The small celebration sounds both romantic and extremely personalized. Forgoing the traditional organ accompaniment, the bride walked out to her favorite song, “Winter Song,” by Kiroro.

Due in part to the pandemic, not many guests were there to see it. But Nicolas Cage’s ex-wife, Alice Kim, was in attendance as the co-parents remain good friends. According to paperwork from the Clark County Clerk?s office, Riko Shibata has now listed her name as Riko Cage. Fingers crossed for the happy couple! And if they remain together, truly, ’till death does them part then Riko will have earned a place — for eternity — in Nic’s famous New Orleans cemetery pyramid tomb.