Tim had a vasectomy, but when Rachel started acting pregnant, he had an idea… 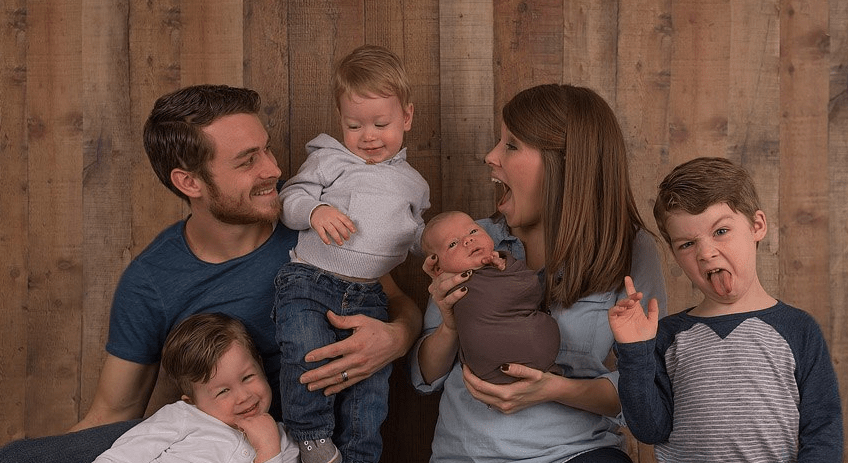 Tim and Rachel Brummel’s love story started when they were only 16 years old. They met though their church, but it wasn’t love at first sight. Tim actually chose to date another girl over Rachel. It wasn’t until that relationship fizzled out, that Tim realized that the love of his life has been right in front of him the whole time.

“When my relationship with the other girl fizzled out, I realized that I made the wrong choice. Rachel and I had become closer friends, and she was just so great to be around. When we finally confessed our feelings for one another, I knew I wanted to do this the right way. I wasn’t allowed to date at the time so I had to convince my parents that Rachel was worth bending the rules for. They agreed to let me date her, but I was told that I had to ask her dad’s permission as well. THAT was terrifying, but luckily he agreed to let Rachel give me a shot.”

When the in-love teens turned 18 years old, Tim knew that he was ready to take their relationship to the next step. After once again getting permission from Rachel’s father, Tim planned how he would propose to Rachel. She had absolutely no idea it was coming.

“It was the holiday season and Tim and I were celebrating with 12 Dates of Christmas. Basically we went on 12 different dates leading up to Christmas. It was so thoughtful and truly showed how much Tim loved me. On Christmas Eve-Eve, we went up to north Georgia. We went on a beautiful train ride around the mountain, really appreciating the beauty that surrounded us. We then went to dinner and were on our way home when Tim told be to cover my eyes with my hat. I was confused, but I pulled my hat over my eyes as we drove up the mountainside. When the car stopped, he led me up a few stairs and then told me to take my hat off. When I took my hat off, he was on his knee, with a ring. I was so overwhelmingly happy.”

Rachel was so enthralled over her engagement, that she didn’t take any notice to where she was.

“Tim asked me to look around, and wanted to know if I was curious as to where we were. I mean I didn’t really care either way, we had just gotten engaged! I asked him where we were and he explained to me, that we were at our new house. Tim had bought us a house! I was so overwhelmed with love. We were really going to start our family! I had always only wanted to be a mother, so my dreams were slowly coming true.”

One year after their marriage, Tim and Rachel welcomed their first child into the world, a little boy. Two more little boys later, and this family was exactly where they wanted to be. After their third child, Tim and Rachel decided that if they were going to expand their family further, they wanted to do so through adoption. After this decision was finalized, Tim went under the knife for a vasectomy. It was about a month after the surgery and when Rachel started having pregnancy symptoms, Tim’s first reaction was to call the doctor that preformed the vasectomy. When he finally got the doctor on the phone, he received news that he would have never expected.

“I called the doctors office to see if it was even possible for Rachel to be pregnant. I really didn’t think there was a chance. I mean I had a vasectomy… there’s no way, right? Wrong. I hadn’t received a follow up call from the doctor so I figured everything was fine. Well, it wasn’t fine. The procedure didn’t work so there was a very likely chance that Rachel was indeed pregnant with our fourth child. Instead of rushing to Rachel with the news, I decided to take matters into my own hands.”

When Tim got home he disconnected the water from their bedroom toilet. The next morning when Rachel went to used the bathroom, the toilet wouldn’t flush, leaving enough urine to use on a pregnancy test. The test came back positive almost immediately. Tim wanted to tell his beautiful wife of three that they would be adding a fourth child into the mix, but he contained his excitement. He was going to pull off the most epic pregnancy announcement of all time.

“Of course I wanted to tell her that she was pregnant with our fourth child! I was so excited, but I knew this opportunity doesn’t come around often. I decided to surprise her with her own pregnancy announcement. While Rachel was at a baby shower (ironically enough) I made her a card and placed the positive pregnancy test under it. I mean how awesome is that?!”

When Rachel arrived home and saw the card, and pregnancy test sitting on the counter, she didn’t know what to think. Tim was quite the prankster, so she thought this was just another one of his silly pranks.

“I was holding a pregnancy test, and I was being told that I’m pregnant. I was in complete shock. I mean, how would he know that I was pregnant before I did? How could I even be pregnant, my husband literally had a vasectomy a month prior? When I realized that Tim wasn’t kidding, I just broke down in tears. I was overwhelmed with joy, but also kinda freaked out. I mean, my husband just told me I was having our fourth child!”

Nine months later they welcomed their fourth baby boy, Merit, into their family. Merit may not have been planned, but he was the missing piece this family didn’t even know they needed. Tim explained that although they were not expecting Merit, they couldn’t feel more blessed that Merit came into this world.

“Sometimes God has other plans, and you have to trust those plans. We know that all of our boys are going to be strong, independent house leaders one day, but we’re especially excited to see what God has in store for Merit. He’s here for a special reason, and we know he’s going to do big things.”