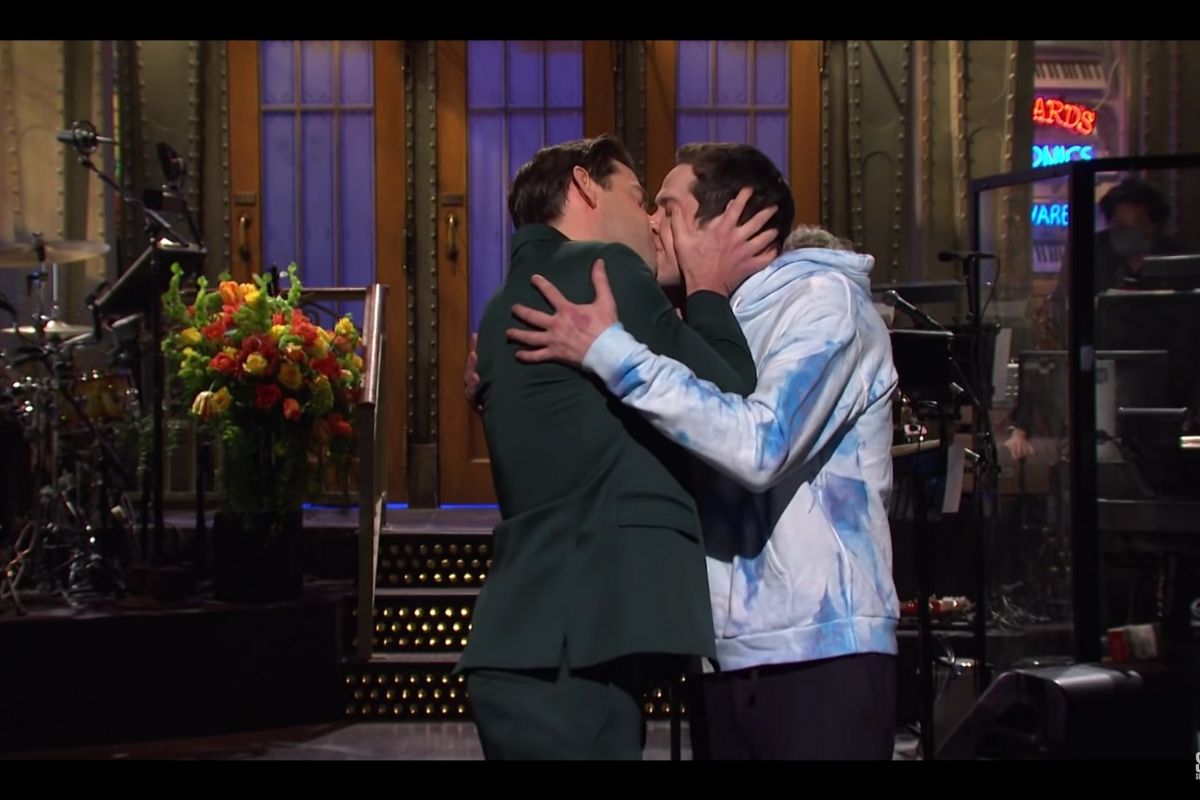 Last March, John Krasinski was meant to host Saturday Night Live as publicity for his upcoming film, A Quiet Place 2. Then, the world stopped. As the Coronavirus pandemic spread quickly around the globe, Krasinki’s turn on the 30 Rock stage was just one of so many cancellations. SNL, eventually, moved to its (respectably played) at-home format for a stretch of 2020 while Krasinski’s performance was rescheduled to kick-off 2021. John Krasinski is a familiar face on NBC. But took until January 30, 2021, for the star’s SNL debut.

Since Saturday Night Live took its winter hiatus just one month ago, a lot has happened: the Capitol riot, Joe Biden’s Inauguration, the GameStop stock market saga… these contemporary phenomena were front and center in the most recent episode live from New York. It’s absurd to imagine just how much has changed from the sketches that were originally envisioned for John Krasinski last spring. But the actor took the challenge in stride, blending easily into various instances of political comedy. Read on for our recap and to watch the best of this week’s SNL!

Content about the new U.S. representative Marjorie Taylor Greene practically writes itself. So it’s no surprise that SNL kicked off 2021 with a hilarious impersonation of the controversial Georgia rep by none other than the stalwart Cecily Strong. As always, Strong infused her defiant representation with an intoxicated flair. Conducted by Kate McKinnon as the terse and tense host, this talk show bit goes on to feature interviews majority GameStop shareholder Derrick Boner (Played by Pete Davidson. Who else?), big tech characters Mark Zuckerberg (Alex Moffat), and Twitter CEO Jack Dorsey (Mikey Day), the recently vaccinated OJ Simpson (Kenan Thompson) and Tom Brady (John Krasinski).

We needed a break from Alec Baldwin‘s Donald Trump, and even from Jim Carrey’s Joe Biden. By inventing a new setting — a TV show aptly called What Still Works? — the cold open was directly political without following the SNL formula that’s been cemented over the past few years. What Still Works? is a fair assessment of this episode as a whole, as the long-lived comedy program feels out its next iteration.

If you don’t see John Krasinski, simply, as Jim from The Office, you’re kidding yourself. Although the actor has valiantly stepped out of his sitcom purview to direct A Quiet Place and bulked up for thrilling roles like Tom Clancy’s Jack Ryan, Krasinski will always be Jim Halpert: a nice guy pining after the sweet receptionist. (Nevermind his real-life love story with actress Emily Blunt.) As a first-time host, Krasinski played into his perceived identity full force. Props to him for embracing the jokes. “Kiss Pam!” is a pretty hilarious way to greet Krasinski, as we hear the planted audience members shout. We’re all thinking it. But in the end, it was goofy Pete Davidson that Krasinski surprisingly plants one on. (I honestly don’t even know who I’m more jealous of.)

Imitating the Undoing theme song, this sketch would have been enough just to feature Chloe Fineman’s excellently over-the-top impression of Nicole Kidman. (Some Easter eggs for those who watched The Undoing: “My son!” and “Did you see my coat?”) Other highlights included Melissa Villaseñor singing for The Queen’s Gambit: “Chess and drugs and drugs and chess.” (But we already knew Villaseñor had pipes.) Cecily Strong appeared regally as Julie Andrews, belting out a theme for the latest Netflix pandemic binge: Bridgerton. Then there is Chloe Fineman, again, returning to the skit as Kim Cattrall for an appropriately sensuous snub regarding the Sex and the City reboot. And, I’m a sucker for Kyle Mooney‘s weirdly aggressive Baby Yoda, seen here rapping: “Mandalorian, native Californian.”

Taking place in Georgia, a.k.a. “Stacey Abrams country,” at a friendly local diner, “Blue Georgia” exaggerates the state’s recent swing to the left dropping buzzwords like avocado toast, pronouns, and Becoming by Michelle Obama. (John Krasinski, playing the sheriff, orders a “beyond meatloaf.”) In the end, SNL‘s lampooning of left-wing culture is essentially light-hearted. The skit feels more like a dig toward Republicans, like Kelly Loeffler, who faced major losses in the historically red area. But a last-second twist involving a mask mandate complicates the forward-thinking picture. The ending felt a bit rushed, but it made for an effective and timely punchline.

Although the premise of “Pandemic Game Night” starts to feel a little obvious, the neighborly chit-chat situating the skit is spot-on. “Okay, the meeting of the Warren Street Covid bubble has now commenced!” John Krasinski announces, uncorking a bottle of wine. “If I didn’t have this bubble, I would go insane,” Cecily Strong adds emphatically. “Oh yeah, you have to have a pod that you can trust!” Aidy Bryant agrees. (Also: Aidy Bryant is back! After some time away during the first half of season 46, the cute comedic powerhouse has finally returned.) The idealistic and awkward, banter between the couples will solicit an eye-roll from just about anyone who has tried to make socializing work over the last few months. In this case, it also doubles as ironic foreshadowing. But that relatable setting cannot save “Pandemic Game Night” from seeming like pretty weak commentary on the Capitol riots. The safe suburban scene feels like a highly removed (and frankly centrist) take on the extreme violence that exploded in Washington D.C.

“Ratatouille” feels like possibly the only holdover from John Krasinski’s original 2020 setlist. This random sketch zeroes in on the inexplicable physical curiosity which drives the Disney cartoon Ratatouille: that pulling on someone’s hair, like reigns, will control their fine motor skills. Transplanted into a bedroom set, “Ratatouille” reveals that a little rat (played by Kyle Mooney) is the real wiz behind John Krasinski’s seductive moves. Then again, maybe this sketch is current after all. In November, Ratatouille the Musical was an internet meme turned crowdsourced TikTok production. Very postmodern.

True to contemporary Saturday Night Live, “Twins” was a messy, off-beat, even off-topic, way to comment on GameStop’s wild stock market rise. Rather than get into the specifics of this financial news, “Twins” focuses on two creepy siblings, a la The Shining, popping up on a CNBC live broadcast. Playing the straight man, dad John Krasinski is left to reign in his kooky offspring (Cecily Strong, Beck Bennett). “Twins” is stupid SNL fun that leans on present-day news without necessarily mocking real figures or rehashing key events. Throughout the Biden administration, I expect that to become the dominant mode of parody on SNL. As the first episode outside of Trump’s presidency, a noticeable lack of urgency colored the Krasinski showcase.

“Democrats in congress have introduced legislation to raise the federal minimum wage to $15 an hour. which would finally give minimum wage workers the ability to pay rent in the year 1995.”

Fran Lebowitz and Martin Scorsese on ‘Pretend It’s a City’

Personally, I could not get through Pretend It’s a City, Martin Scorsese’s new Netflix docu-series following the cheeky intellectual Fran Lebowitz. (We get it, Fran! Tourists walk slow!) The most interesting component, though, is the friendship that’s apparently developed between these two seemingly unrelated celebs. SNL took note. And ran with it. In this ridiculous Weekend Update interview, their surprising buddy dynamics are put on display. Kyle Mooney plays the adoring Martin Scorsese to Bowen Yang’s pitch-perfect, blustering Fran Lebowitz. The mini-sketch pretty effectively previews Pretend It’s a City.

Next week: Dan Levy hosts with Phoebe Bridgers performing as the musical guest.